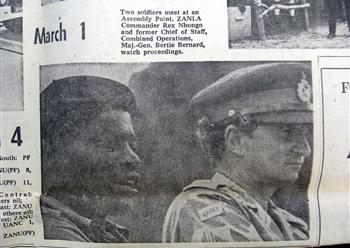 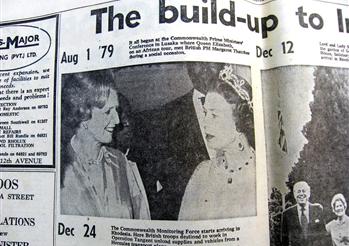 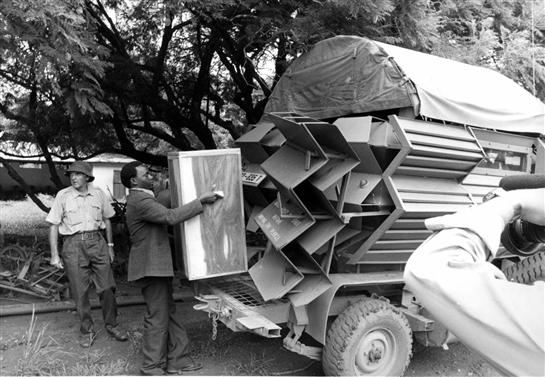 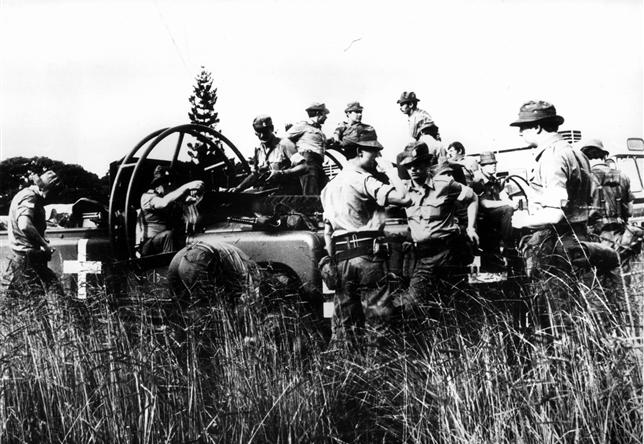 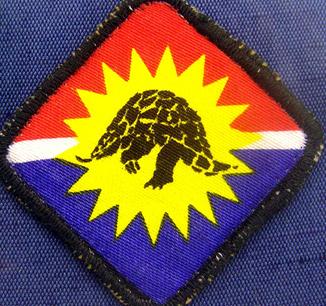 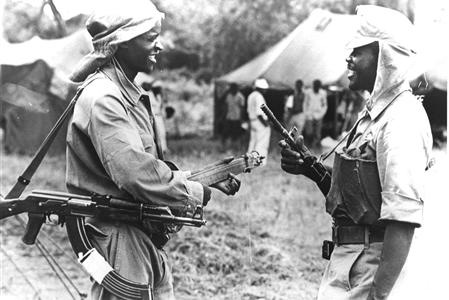 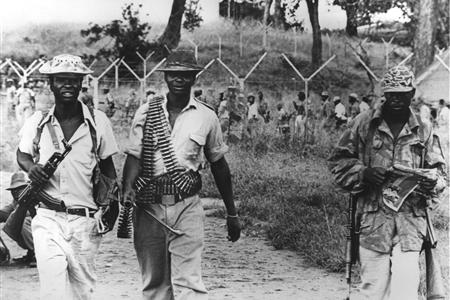 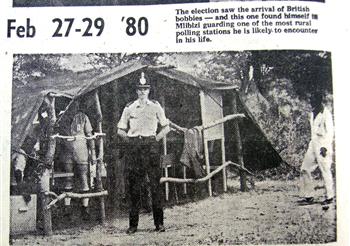 Rhodesia Goes to the Polls: February 1980

At the end of February 1980, the country which had briefly reverted to the legal entity of the British Colony of Southern Rhodesia, complete with a Governor, went to the polls to choose a new government. A settlement accord had been signed at the Lancaster House Conference by all belligerent participants in the Bush War, to allow for the fulfilment of the democratic process in an environment of relative peace.

By the end of the first week of January 1980, more than 17,000 guerrillas had already assembled at various pre-designated points throughout the country for processing, a daunting task for Major General John Acland’s Commonwealth Monitoring Force of just over 1200, drawn from Britain, Australia, New Zealand, Kenya and Fiji. They were also tasked to monitor the JOCs throughout the operational areas, providing essential communications needs between the two longstanding antagonists. Both sides remained under their respective command structures, placing great demands on the diplomatic skills of the numerically inferior monitoring forces to defuse potential situations of conflict. The Commonwealth operation was codenamed Agila, described afterwards by Acland as one of the most successful of its type in the history of the British army.

Above left: The Rhodesia Medal awarded to members of the Commonwealth Monitoring Forces

Above right: The Pangolin patch worn on the uniforms of the Monitoring Forces

Amazingly, the ceasefire held, and eventually, some 22000 guerrillas were contained, and dug in, in the assembly points. However, it soon became evident that many were not in fact combatants, but mujibas ordered in to swell numbers to acceptable levels. It was estimated that 7000 fully trained and armed ZANLA insurgents remained on stand-by outside the assembly points. In addition, ComOps estimated that some 27000 ZANLA and ZIPRA cadres still remained in rear bases in Mozambique and Zambia.

Of growing concern to Governor Soames however, was the large increase in the number of incidents of crime and banditry in areas adjacent to many of the assembly points. This, together with escalating reports of political intimidation and violence, led Soames to give the go ahead for the deployment of regular Security Forces and auxiliaries into such areas.

Above: ZIPRA guerrillas at Assembly Point 1 in Matabeleland

Rhodesian Light Infantry Fire Force units were placed on standby, in the event that Commonwealth Forces based in assembly points needed emergency extraction.

British Election Commissioners and Supervisors were the next to arrive who, together with British uniformed policemen, or Bobbies, would monitor the fairness of the democratic process.

Intimidation was to be a major issue with the Rhodesians, who strongly and continuously lobbied Governor Soames to take action by disenfranchising known areas where intimidation of the rural population continued unabated. In particular, ZANLA’s network of informers and mujibas would, in many cases, curtail the canvassing activities of other legitimate parties. However, the general consensus amongst the British election supervisors, many of them ex-colonial civil servants, was that certain levels of intimidation were a legacy of a freshly ended armed conflict, and therefore did not warrant drastic measures against offending parties.

Above: The Bulawayo Chronicle charts the progress of the elections leading to Zimbabwe independence on 18 April 1980

One such election supervisor in the east of the country, David Glendening, was to report to the British election commissioner, Sir John Boynton, that intimidation may only increase ZANU(PF)’s share of the vote by ten percent, and that the majority of the black electorate in the area would vote for Mugabe as they wanted a peaceful existence to return to their disrupted lives. He added that the tribes people believed that only Mugabe could end the war.

In the absence of a voters’ register, it was estimated that less than three million would be entitled to vote at the more than 650 static and mobile polling stations throughout the country. The British policeman, in his almost iconic Bobby uniform and helmet, would provide a law-enforcing element at the stations, and it would be his responsibility to ensure the safety of ballot boxes.

Above: A ballot box is loaded into a Kudu under the watchful eye of a BSAP Field Reservist, Morgenster Mission, Victoria Province

All arms of the combined Security Forces, numbering 60,000, were deployed as a massive presence at key and strategic areas and instillations. Conventionally equipped troops and armoured vehicles stood watch at radio and television stations and by government offices in the centre of Salisbury. From the 23rd to the 25th February 1980, a total of 571 British Bobbies flew into Salisbury Airport in batches, on various commercial flights. On arrival, they were shuttled to the New Serum Air Force Base, adjacent to the Salisbury Airport apron. The RAF component of the Commonwealth Monitoring Force was based at New Serum, their operational HQ for the duration of their mission. At New Serum, the Bobbies were briefed and then deployed to their designated districts, where they would be the "Election Observers" - the eyes and ears on the ground.

The British could have put the election process on hold but did not. They declared the election to be free and fair. It was not, as admitted later by the Foreign Secretary Lord Carrington who, in his memoirs “Reflect of Things Past” wrote,

“Intimidation was certainly not confined to any one faction, but the activities of Mugabe’s followers, in particular, led to considerable revulsion, and there were many voices – not confined to white Rhodesians. Some British civil servants felt the same saying loudly that Mugabe’s further participation in the Election should be forbidden.”

Above: Elements of the British Monitoring Force at their camp near Salisbury Airport