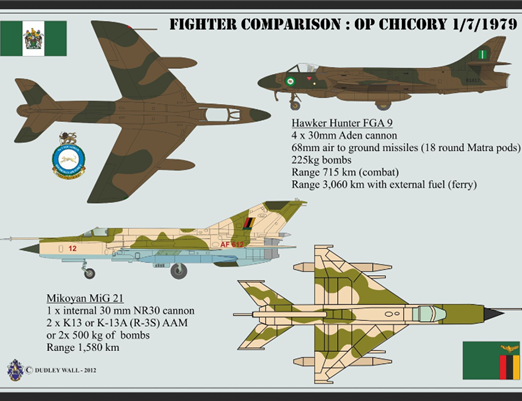 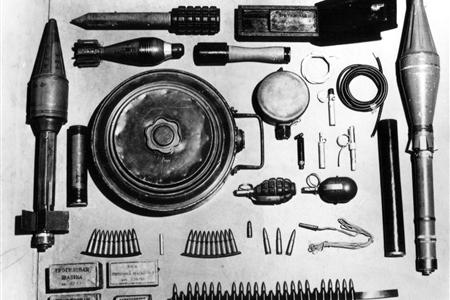 As the sun rose over Lake Kariba on Sunday 1 July 1979, five Bell 205 helicopters of No 8 Squadron of the Rhodesian Air Force arrived at Bumi Hills for re-fuelling, before crossing the lake later that day towards Lusaka in Zambia. On board were fifty operators of ‘C’ Squadron SAS, on their second ‘visit’ to Lusaka in less than a week.

On the previous Tuesday, the SAS, supported by the Air Force, had conducted an assault, code-named Operation Carpet, on ZIPRA’s Department of National Security and Order Headquarters in Lusaka. Sadly, Captain Martin Pearse SCR was tragically killed in this operation. It is interesting to note that the Hunters of No 1 Squadron, which had provided a diversionary attack on the ZIPRA FC base, had to make a quick return to the Thornhill Air Station in Gwelo to refuel and fly to Salisbury to participate in the Zimbabwe-Rhodesia celebrations fly-past.

In the successful Lusaka raid, the troops captured large quantities of documents and a senior ZIPRA intelligence officer, Alexander Vusa. The latter would provide essential information about the ZIPRA camp, JZ, the target of Op Chicory. Situated 15 kilometres west of Lusaka, the site housed a very large arms cache, together with stores and equipment, all ear-marked for use against Zimbabwe-Rhodesia. Information obtained from Vusa confirmed that Libyan aircraft had flown large quantities of Russian-made war material from Angola into Lusaka at night. Trucks had then transported the material to JZ camp, to be stored in large caches in readiness for issue to Joshua Nkomo’s conventional forces based at Mulungushi, north east of Lusaka. Reconnaissance photographs taken by a Canberra confirmed the existence of the camp, also confirming the presence of arms and munitions caches in the fifteen acre area.

An hour after their departure from Bumi, the flight of five Bell helicopters, iconic workhorses of the Vietnam War, were overflown by Hawker Hunters and Canberras on their way to ‘soften-up’ the target. Intelligence proved accurate; as the troops landed in the camp they encountered only light resistance from a skeleton force on protection duty. As the operators consolidated their positions in three separate pre-designated drop zones, they commenced a systematic destruction of the caches of war material and the political commissar’s camp.

The operation was directed from an orbiting Dakota by the Commander of Combined Operations, Lt General Peter Walls. Providing air cover were two Hunters, armed with Sidewinder missiles in anticipation of a possible stand-off with Zambian Air Force MiGs stationed at Lusaka and Mumbwa. As it transpired, the Zambians scrambled their MiG 19s from these two air stations, the aircraft armed with Russian K-13 ‘Atoll’ air-to-air missiles. Their presence however, was not belligerent, but apparently more just to have a look. Responding to a request from a Hunter pilot to deploy a Sidewinder against two low-flying silver MiGs, Walls gave the order that they were to be left alone and only engaged if their activities became hostile in any way. The operation was against ZIPRA and not the government and people of Zambia. On the ground, a convoy of Zambian Army vehicles had also approached the camp, but stayed well back from the explosions and enormous palls of acrid smoke that signalled the progress of the Rhodesians. The Zambian troops would only offer the odd shot at the helicopters as the SAS operators later departed at the end of their mission.

In the adjoining political commissar’s camp, troops set alight five hundred tents together with the owners’ personal belongings. Explosive charges laid by the troops detonated at various caches scattered around the camp, resulting in massive fireworks displays as 122mm and RPG7 rockets shot off into the smoke-choked sky. This, together with periodic earth-shuddering explosions, did not deter the Rhodesian soldiers from their race against the clock to inflict maximum damage to the camp. Last light was rapidly approaching and they would need to make their way to the landing zones for uplifting by helicopter back home. The same five helicopters arrived, the only remaining airworthy Bell 205ones, to ferry the men back across the waters of Lake Kariba and on to their barracks in Salisbury. Disaster was narrowly averted as the rotor blades of one of the machines clipped a tree as it took off, but managed to recover and continue home with its cargo of exhausted but satisfied troops.

The actual first-hand inventory done by the SAS operators of arms and ammunition destroyed included 1050 x SKS and 80 x AK47 rifles; seven RPD and 21 light machine guns; 131 sub-machine guns, including eight vintage Thompsons; 400 rifle grenades and 800 hand grenades; 500 x 60mm and 400 x 82mm mortar bombs; 400 anti-tank landmines, 216 limpet mines and 30 anti-personnel mines; 600 x RPG, 160 x B10 and 70 x 122mm rockets; two 75mm recoilless rifles; and 726 000 rounds small arms ammunition. There were also two cars, a Land Rover, 75 Klepper canoes, a variety of inflatable boats and outboard motors, and fourteen tonnes of diesel fuel. The hundred tonnes of arms, munitions and ordnance destroyed that day by the SAS, represented Nkomo’s total reserves, which he had planned to use in his conventional attack to ‘liberate’ Rhodesia. He had intended using his conventionally trained battalions, based at Mulungushi, to launch a pre-emptive strike into Rhodesia before a ceasefire was declared. The raid had been an unequivocal success with no loss of men or machines. Unlike so many previous external raids across the country’s borders where it was believed that the terrorists had somehow been forewarned, the arrival of the SAS troops at Camp JZ had been totally unexpected, thus allowing for this very high level of success. Some argued that this was due to the fact that certain avenues of communications protocol had not been followed prior to the operation, which had perhaps inadvertently reduced the risk of a ‘leak’ from revealing the objectives of the raid. 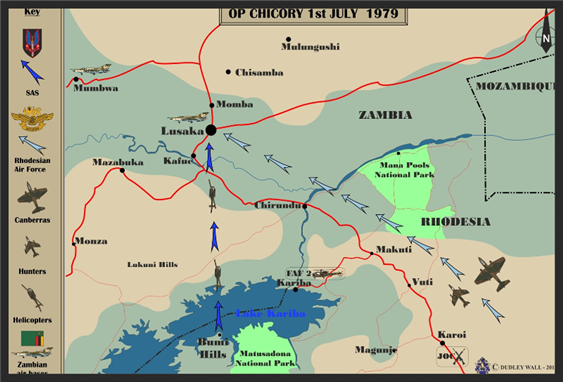