Nettleton, seated second left, and the crew of his Lancaster bomber 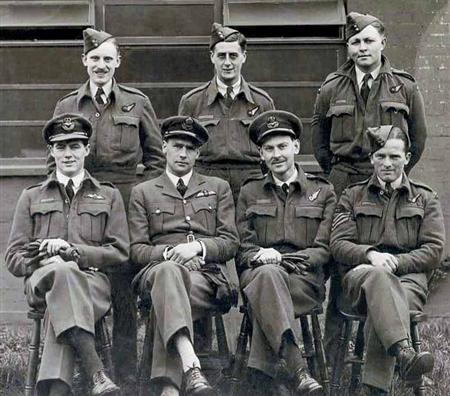 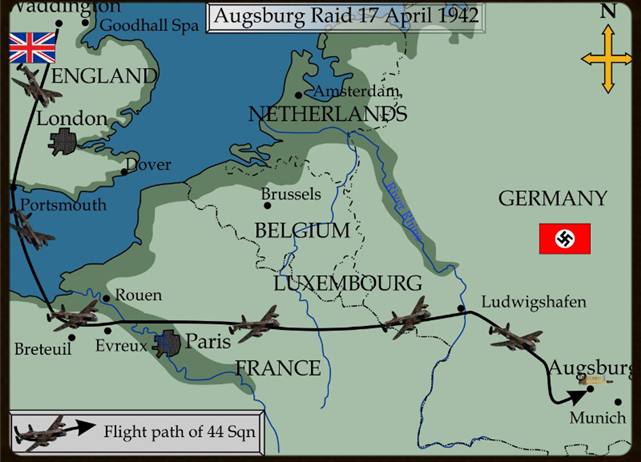 On 17 April 1942, six Lancaster bombers of 44(Rhodesia) Squadron took off from their base at RAF Waddington in Lincolnshire, England. Joined by a further six bombers from 97 Squadron at RAF Woodhall Spa, their target would be the MAN marine diesel engine factory in Augsburg, Germany, 1000 miles away. At just after 1500 hours, the Lancasters, flying in formations or Vic’s of three led by Squadron Leader John Nettleton in R5508 ‘B’, roared low over the English countryside in a southerly direction towards the rendezvous point at Selsey Bill on the West Sussex coast. The aircraft dropped to fifty feet as they skimmed the waves of the English Channel towards the French coast.

As a diversionary tactic to keep their way clear of enemy interference, thirty Boston bombers accompanied by hundreds of fighters, struck at enemy installations further north in the Cherbourg area. For the first part of their flight at low-level over occupied France, Nettleton’s formations, now some distance ahead of those of 97 Squadron, seemed to avoid detection by German ground defences and fighter aircraft. However, the very audacity with which the raid was being conducted in broad daylight would very quickly compromise the presence of the heavily-laden English bombers. As the 44 Squadron aircraft navigated around the edge of a German airfield at Beaumont le Roger, they were spotted by German fighters returning from engaging the diversionary RAF aircraft at Cherbourg. Messerschmitt 109s and Focke-Wulf 190s of II Gruppe/Jagdgeschwader 2 Richthoffen immediately set upon the vulnerable bombers, with inevitable and disastrous consequences. In quick succession, the second formation of three succumbed to the German fighter onslaught. Crum’s Lancaster, falling victim to Unteroffizier Pohl’s Me-109, became the German squadron’s 1000th claimed kill of the war. The whole crew survived the crash, including Rhodesian WO Albert Dedman. They all spent the rest of the war as POWs.

The fighters, now joined by 100-victory ace Oesau, turned their attentions to the remaining formation of three Lancasters. Using his cannon and guns, Oesau let loose a close-range and devastating hail of fire on Rhodes’ bomber. With both port engines ablaze and the fire rapidly spreading to the starboard ones, the stricken bomber suddenly stalled and nose-dived towards the ground, just missing the remaining two Lancasters of Nettleton and Garwell. At this stage, lack of fuel forced the German fighters to break off their attack, leaving the two damaged Lancasters to limp on towards Augsburg. Finally reaching their target, the two bombers released their payloads of four 1000-pound GP high-explosive bombs each. As they began their run-out, however, Garwell’s aircraft was hit by heavy ground fire, causing him to crash-land the bomber, saving the lives of most of his crew, including Rhodesian WO Laurence Dando.

The approaching darkness provided Nettleton with welcome cover as he struggled to get him and his crew safely home to England. At one o’clock the following morning, Nettleton brought his aircraft safely to the ground at Squire’s Gate aerodrome near Blackpool. He telephoned Waddington to say that he had returned, only to receive the devastating news that he was the only one from 44(Rhodesia) Squadron to do so. The six Lancasters of 97 Squadron fared little better, as two were hit on the run-in. Of the twelve Lancasters that set off from England on this raid, only five would return. Of the 85 pilots and crew, 49 were missing. 414452 Squadron Leader John Dering Nettleton, born in Natal, South Africa, was awarded the Victoria Cross for displaying “…unflinching determination as well as leadership and valour of the highest order.” 80207 Pilot Officer Patrick Arthur Dorehill of Ft Victoria was awarded the Distinguished Flying Cross, and 777675 Sergeant Donald Norman Huntley of Salisbury and 778173 WO Laurence Dando the Distinguished Flying Medal, for displaying “…courage, fortitude and skill of the highest order.”. Fellow Rhodesian crewmen Sergeant Pilot Albert Dedman and Sergeant Laurence Dando survived their aircraft crashes and were taken prisoner by the Germans.

The Rhodesians who paid the ultimate price on this fateful raid were Pilot Officer Haworth Peall, Sergeant Pilot Brian Moss and Sergeant Wireless Operator/Air Gunner Peter Venter. All three are buried in the Beaumont le Roger Communal Cemetery, France. Nettleton was killed in action on 13 July 1943 when his Lancaster, KM-Z was shot down over the Bay of Biscay. His body and those of his crew were never recovered. Huntley would be killed in action just a few months after the Augsburg Raid on 14 September 1942 over Bremen, Germany. He is buried in Epe General Cemetery in the Netherlands. 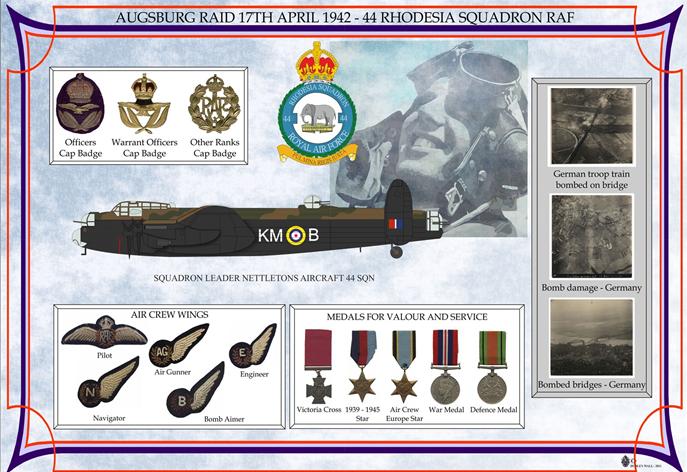