A Government Gazette dated 14 October 1977, announced the posthumous award of the Conspicuous Gallantry Decoration (CGD) to Rudolf Kogler, for “acts of the highest gallantry and brave conduct of an outstanding order in a non-combatant role.”

The CGD was Rhodesia’s highest civilian award, second only to the Grand Cross of Valour. There were only ever two recipients. Kogler’s citation reads:

“Rudolf Josef Kogler, aged 44, of Bulawayo was the first recipient of the country’s highest civilian gallantry medal. ‘Rudi’ Kogler was born in Graz, Austria and came to Rhodesia in 1956. He was working at a building site at the Regina Mundi Mission, Lupane (north west Rhodesia, Matabeleland North Province) on 6 August when five ZIPRA terrorists arrived. They rounded up Kogler with seven missionaries, five of whom were women. They were then robbed of wristwatches, radios and cash. Kogler surrendered a weapon but kept a concealed pistol. The terrorists manhandled Kogler and then led him and a missionary brother away, obviously with the intention of murdering them. Kogler drew his concealed pistol and shot the ZIPRA leader dead, But in his death throes the terrorist fired back killing Kogler instantly. The rest of the gang then fled.”

A Government Gazette dated 20 April 1979, announce the award of the Conspicuous Gallantry Decoration, (C.G.D.) for acts of the highest gallantry and brave conduct of an outstanding order in a non-combatant capacity, to Jamie Scott, a fifteen year old school-boy at Churchill High School, Salisbury. He was only the second person ever to receive the award.

In February 1979 Jamie and his friend, Pieter Visser, were riding a motorbike in the Beatrice area when they saw a group of terrorists. The terrorists fired and hit Jamie twice as the school-boy fired his rifle back at them. Jamie was hit a third time and he dived to take cover with his injured friend. Then his rifle jammed. He managed to clear his rifle just as three terrorists advanced on them thinking they were dead or had run out of ammunition. As they approached Jamie jumped up and ran towards the ‘terrs’ firing at them at the same time. Although he was shot again he carried on until the terrorists withdrew. Only when the terrorists had gone and help had arrived did Jamie collapse. The bullets had hit him in the back, the thigh, the calf and heel; a fifth bullet had grazed his chest.

He sold his medal in 1986 to raise money for the payment of medical expenses. 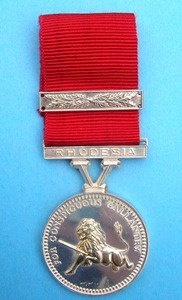