Over the years, much has been written about individuals and the forces and their operations in what became commonly known as South Africa’s Border War, or Grens Oorlog, but never before has the human spirit of this 23-year-old conflict been so graphically and unashamedly captured and chronicled as in this book.

Equally unique, was the exclusive use of social media to invite and encourage individuals to tell their personal stories, without apology or recrimination, and so provide an indelible oral history of the war.

Over a period of three years, 21,000 of them spoke: national service troopies, permanent force officers, aviators, aircrew, medics, submariners and padres. Erstwhile antagonists also stepped up to the plate, placing their own personal first-hand experiences amongst those of their enemies of yesterday: Russians, Cubans, Angolans and SWAPO.

The story is further enriched by the inclusion of a rich plethora of hitherto unseen ‘unofficial’ photographs of stolen memories, in a war situation where the taking of any such photographs was strictly prohibited.

Veterans unabashedly wear their hearts on their sleeves, speaking of the psychological impact of untold tragedy and grief; of bravery and unmitigated fear; of shenanigans and mischievous escapades to relieve the pressures of war; of miracles and fate; and of camaraderie. 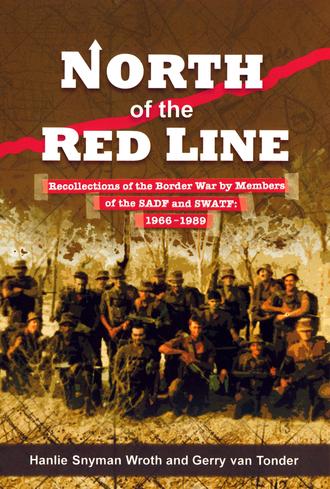 North of the Red Line