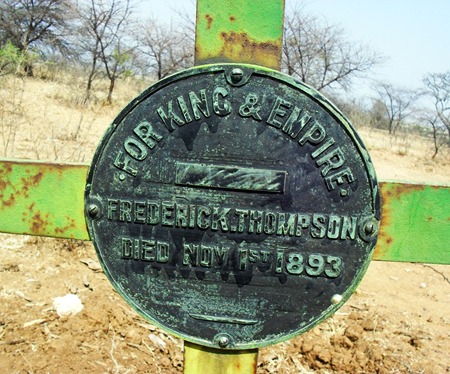 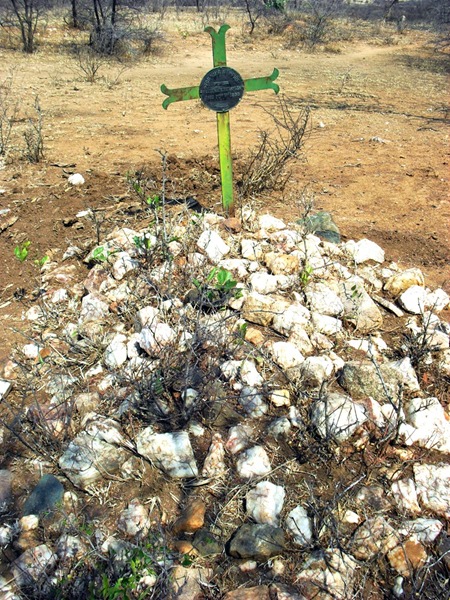 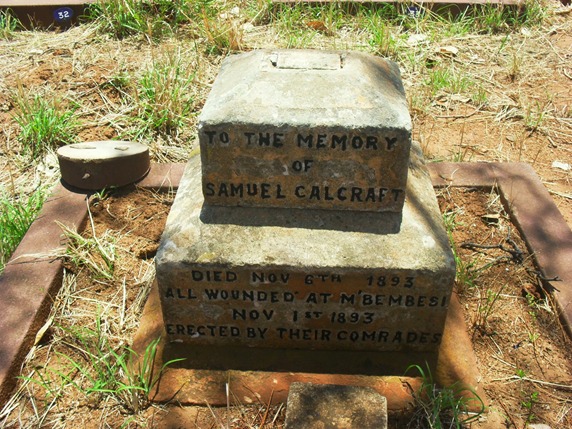 We are so very fortunate to have a man such as Alan Bryant in Zimbabwe who continues to assist with so many aspects of ensuring that Rhodesia’s military history is preserved. I recently received from him the photographs above, prompting me to do a bit of digging into the man shown. The pictures, taken at Bembesi in Zimbabwe, are of the grave of Trooper Frederick Thompson of the Salisbury Column, BSACo, who was killed in action at the Battle of Bembesi on 1 November 1893.

It was inevitable that the new settlers in Mashonaland would be at variance with Lobengula’s belief that the Mashona tribes fell under his rule, and that he therefore had the right, with total impunity, to do with them as he pleased. Despite repeated representations by the BSACo to the King that the interference of his impis was in contravention of the concession he had granted them, the situation came to a head in July 1893 near Ft Victoria.

Differences over compensation for the theft of telegraph wire led to a skirmish between 34 mounted troopers from Ft Victoria, led by Capt Charles Lendy, and Umgandine’s impi. Over the next few months, the forts at Salisbury, Charter, Victoria and Tuli strengthened their positions in anticipation of a full-scale row with the amaNdebele. Commandant Raaff, the resident magistrate at Ft Tuli, was sent to the Transvaal to purchase 750 horses and to recruit 250 Boers. At Ft Victoria, Maj Allan Wilson raised 250 mounted troops. Ft Salisbury raised a similar number under Maj P Forbes, while Ft Charter managed a small defensive corps.

Subsequent to a Bechuanaland Police patrol being fired on by amaNdebele warriors on the Shashi River, the British High Commissioner gave permission for Lobengula’s domain to be invaded. Dr Jameson immediately set off with the Victoria column, meeting the one from Salisbury at Iron Mine Hill in the midlands.

On the afternoon of 24 October, the columns crossed the Shangani River and went into two laagers. In the early hours of the following morning, an estimated 5,000 to 6,000 men of eight amaNdebele regiments attacked the laagers, but the heavy firepower provided by the Maxim machine-guns and various field guns ensured the position was held, with the assailants losing 500 to 600 killed and wounded. This Battle of Shangani is not to be confused with the battle further north west on the same river in which Major Allan Wilson and his men were massacred more than a month later.

By 31 October, the column had entered Chief Semapulami’s area, where at Insingweni’s kraal it became very evident that several thousand amaNdebele had recently camped. On 1 November, the expedition moved south of the Bembesi River, setting up defensive positions on some open ground just before noon. The Victoria laager was well formed, but the Salisbury one was more oval with openings for the cannons. To the left, about 150 metres from the laager, stood three roofless huts.

At 1255, the Matabele attacked from all sides, their numbers dominated by the Imbeza and Ingubo Regiments, covering a front of several hundred metres. Heavy but largely poorly directed rifle fire, mainly from Martini-Henry’s, poured in. The Salisbury laager took the brunt of the attack, with the right and rear sides coming under sustained enemy fire. Satisfied that his Victoria laager was relatively secure, Maj Allan Wilson moved three of his Maxims and a Hotchkiss gun to the flanks of the position where, with added fire from a Gardner, a Nordenfeldt and two shell guns, the amaNdebele attack was held back. With casualties amounting to almost double that sustained a few days earlier at the Shangani, by 1.30 that afternoon there was a significant reduction in the enemy’s assault, as the superior and accurate fire power from the laagers proved too much for the Matabele.

At 1400, Capt Dullimore with 100 of the Victoria men, was sent out to take the battle to the retiring impis. Earlier on, during the heavy fighting taking place around the Salisbury laager, Matabele were seen to occupy the three roofless huts mentioned above. From this slightly elevated position, they were able to fire into the waggons, causing the deaths of four troopers. Trooper Frederick Thompson was killed immediately. Troopers Carey and Siebert died of their wounds the following day, and upon reaching Bulawayo three days later, Trooper Calcraft also succumbed to his wounds. This explains the presence of only one grave at the Bembesi site. I informed Alan Bryant of this, so he and a friend set out to find the graves of the other three. The final resting place of Trooper Samuel Calcraft was eventually found in the Bulawayo Cemetery (see picture below).

I have drawn my research from two sources, namely the first-hand account by Capt Sir John Willoughby of the Royal Horse Guards and military adviser to the Salisbury column, and notes by Jack Carruthers who was a Scout with the Victoria contingent.