As the Grey’s Scouts retired from the Umguza to consolidate their position, they were fired upon from scrub to the left of their line of retreat. Trooper Wise was struck high in the back by a bullet, the round exiting near his collar-bone. At the same time, his horse stumbled, dislodging the wounded Wise and galloping off back towards Bulawayo. Trooper Frank William Baxter immediately came to Wise’s aid, dismounting and helping his badly wounded comrade on to his horse. This act undoubtedly saved the life of Trooper Wise, but in so doing, placed his own life in serious jeopardy as amaNdebele warriors closed in. Capt Grey and Lieutenant Hook came back to assist. As Baxter tried to join Hook on his horse, Hook was also shot, the bullet passing through his buttock and out through his groin. Grey sustained a bullet graze across his forehead, leaving him momentarily disorientated. With the situation worsening by the moment, Trooper Long, a well-known member of the Scouts, arrived on the scene, and managed to get Baxter to take hold of his stirrup leather, but fate intervened once more. As Long was struggling to move Baxter away, Baxter was wounded in the side, causing him to let go of the stirrup and fall to the ground. The amaNdebele moved in and killed Baxter. Hook nearly also fell victim to the advancing amaNdebele, his horse being shot out from under him. The desperate scene would witness another selfless act of bravery on that day, as Crewe surrendered his horse to the badly wounded Hook. Crewe bravely fought his way back on foot, assisted by covering fire from other Scouts. Wise and Hook both recovered from their wounds.

At the time of his death Baxter's bravery was recognised to the extent that, had he survived, he would have received the Victoria Cross. But it was only in 1907 when King Edward VII changed the qualification to allow for the Victoria Cross to be awarded posthumously, that Baxter was officially rewarded for his selfless actions that day.

On Wednesday morning 22 April 1896, a small force under the command of Capt Bisset left Bulawayo for the Umguza, with the objective of dislodging a strong Matabele presence in the area. The 120-strong mounted patrol included twenty scouts under Capt Grey; forty men of the Afrikander Corps under Capt van Niekerk; twenty each under Capt Meikle and Capt Brand, with another twenty unattached horsemen. They were joined by Johan Colenbrander and 100 colonial natives. Frederick Courteney Selous accompanied the expedition which was also armed with a Hotchkiss and a Maxim gun. As the patrol approached the Umguza River, it came under heavy fire from concealed amaNdebele positions. Running skirmishes resulted, forcing the amaNdebele back towards a more secure position in a bend of the river. This position was outflanked by Grey’s Scouts from across the river, forcing two to three hundred warriors fleeing into the open, but apparent confusion arose amongst the various elements of the patrol and advantage was not taken of the opportunity to make a major impact on the amaNdebele. In the process, Selous became separated from his mount, and with only two of his original thirty rounds of ammunition left, found himself in a very dangerous situation. A Lieutenant Windley came to Selous’ assistance and with a group of amaNdebele less than one hundred metres away, pulled Selous on to his horse and the two made good their escape, bullets striking around them as they rode away. Selous was indebted to Windley for his gallantry in saving his life that day, but states that Windley was not the only member of the patrol to perform a brave and “self-denying” deed that day.

​This photograph was sent to me by Alan Bryant, who is very busy in Bulawayo's cemetery renovating military graves. To date he has shared photos of graves from the bush war of the 1970s, but this was the first one that goes back so far in our history. Alan does an admirable job. I thank and salute him.

Alan Bryant, upon renovating Baxter's grave, had a plaque made and placed on the headstone, recognising that Baxter was a Victoria Cross recipient. These photos are both by Alan Bryant. 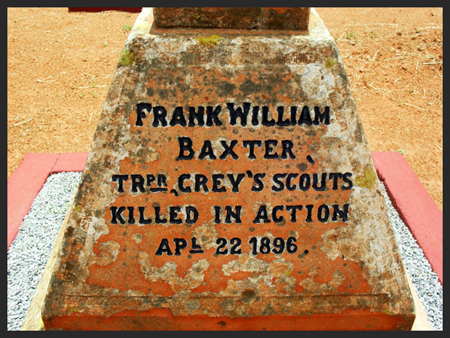 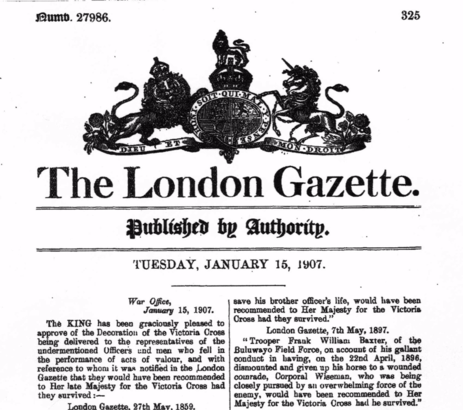 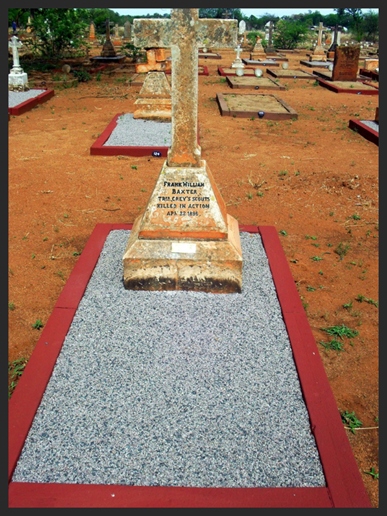 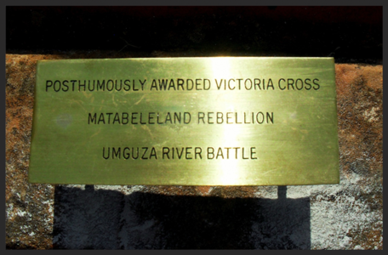