In 1938, Keith Coster went into uniformed service in South Africa and earned his wings. In 1942, he was shot down in North Africa, and spent the rest of the war incarcerated in various Italian and German prisoner of war camps, including the famous Stalag Luft III of Great Escape fame.  At the end of the war, he transferred to the South African army, and from there, with the rank of major, left South Africa in 1955 to join the Federation of Rhodesia and Nyasaland army, where he rose to the rank of lieutenant-colonel, commanding officer of the 2nd Battalion, the King’s African Rifles, based in the then Nyasaland.  With the demise of the Federation in 1963, it was a natural progression for him to transfer to the Southern Rhodesian Army. In 1968, and with the rank of lieutenant-general, he was appointed general officer commanding of the Rhodesian Army, a post he held until his retirement in 1972.  He then went back to South Africa, where he spent thirteen years serving as a ‘civilian officer’ in the top national security organs of that country, for which he was bestowed with South Africa’s highest award, the Star of South Africa.

The file is brim-full of his personal accounts: pilot training, encounters with German aircraft, being shot down and taken prisoner; his experiences as a POW; the Rhodesian Army, including papers on security; a brush with a Russian spy while working for South African state security; and much, much more.

What an amazing military life, which I now wish to share as it is a vitally important part of Rhodesian military history. I have gone a private printing route, based on print-to-order. At the moment, I am making the file available to interested parties in the UK only, at a price of £29.00, inc. P&P. If you wish me to have a copy printed for you, please e-mail me on g.van-tonder@sky.com

In August 2015, the late former-commander of the Rhodesian Army (1968–1972), Lt-Gen Keith Coster’s son, Steve, and daughter-in-law, Cindy, approached me, wanting to know if I would like to take custody of personal memoirs, photographs, letters, certificates, records and some items of uniform that had belonged to the general. It was their wish that the collection find a permanent home in a Rhodesian museum.  Suffice to say, I very readily accepted their magnanimous offer. In return, I promised them that I would construct a fact file on the military life of the general, so that a permanent record could be established.  The full-colour, coil-bound, 265-page file mainly comprises information and photos that have never before seen the light of day, let alone be published.  General Coster’s life in uniform, as I titled it, was, for me, a massive revelation. I have now fulfilled my promise to the family who, on receiving the fact file, as their endorsement, said:

“Hi Gerry, I have just downloaded your magnificent work on my dad. You have truly done a remarkable job of compiling all that history and information. It’s amazing what you have unearthed, well over and above that we supplied you!  It will take me some time to go thru and absorb all the detail, but I wanted to say a huge a thank you for your efforts on behalf of our family. It will remain a fantastic legacy of his life. I am sure his grandchildren, other relatives and friends will find the work fascinating, and will enjoy reading this detailed history of his life. With grateful thanks, Steve” (Coster)

“Hi Gerry, A Huge Thank You for all the work you’ve put in and the magnificent tribute that you’ve put together – I know that Dad would have approved! I haven’t read much of it yet but it really is a wonderful memoir of Dad’s life. Thanks again for your huge effort and the many hours it took you to put it all together.  Kind regards and keep safe, Cindy” (Coster) 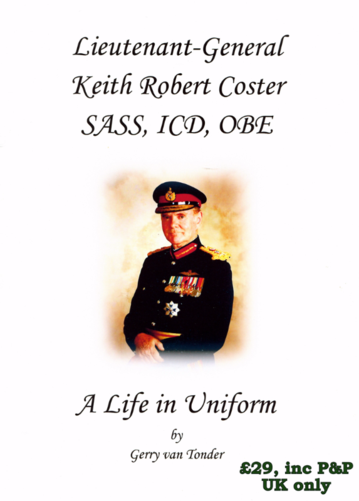