​After publishing my first book in 2012 on the Bush War Roll of Honour, I have been drawn into other projects, which culminated in the co-authored publication of a further five books including: Rhodesia Regiment 1899-1981 (released July 2014). I have also authored the Book of Remembrance: Rhodesia Native Regiment and Rhodesian African Rifles (July 2015), and Lt-Gen Keith Robert Coster: A Life in Uniform. These projects have demanded an enormous amount of time over several years as my scope of research has widened dramatically, covering decades of Rhodesian military history from the 1890s to 1980, in widely spread theatres of war, as well as in the defence of Rhodesia.

Since then, I have co-authored North of the Red Line: Recollections of the Border War by Members of the South African Armed Forces (for which I also did all the translating from Afrikaans), which was published in June 2016.

April 2016, saw the landmark publishing of my first UK book, Derby in 50 Buildings. This was followed by Chesterfield’s Military Heritage, released July 2016, and Mansfield Through Time, in September 2016. These three books have been published by Amberley Publishing, and may be purchased from their website:

Following on from this, there was an exciting development when, in late 2016, I started writing for Pen and Sword Books Ltd.  I will be contracted for a further four to six titles for 2018–19.​ 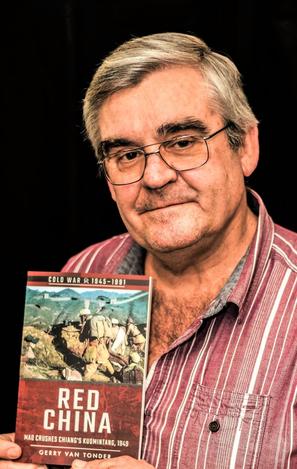 I was born in Bulawayo, Rhodesia, in 1955, the youngest of four boys, and attended Henry Low Primary School followed by Hamilton High. I completed my secondary education at Thornhill High in Gwelo.

I joined the Ministry of Internal Affairs (Intaf) as a Cadet District Officer  in 1975, stationed at Karoi. A year later, I underwent compulsory basic military training at the Intaf training facility at Chikurubi in Salisbury, as a member of Internal Affairs National Service 4 (IANS4) call-up. For most of the duration of my national service, I was based at Fort Harrison in the Zambezi Valley, Sipolilo, followed by a few months in the Intaf intelligence section in Mt Darwin.

From 1977 to 1979, I read for the  Internal Affairs' sponsored Bachelor of Administration (Honours) Degree course at the University of Rhodesia. Upon graduating, I was again posted to Mount Darwin as a District Officer, being the Returning Officer for Rushinga during the Zimbabwe elections, and working through the period of the cease fire and the return of ZANLA insurgents.

In 1980 I left Intaf and joined a commercial marketing firm in Salisbury. In 1983 I was head-hunted by FAVCO, where I became Managing Director.

In 1999, with my British-born wife Tracey and two children, we left Zimbabwe for England. My son, Andries, a BSc (Hons) Biology and Masters in Bioinformatics graduate,  has recently completed his DPhil in Clinical Medicine at the University of Oxford. My daughter Ashleigh practices medicine here in England while undergoing specialist training in gynaecology and obstetrics.​​​