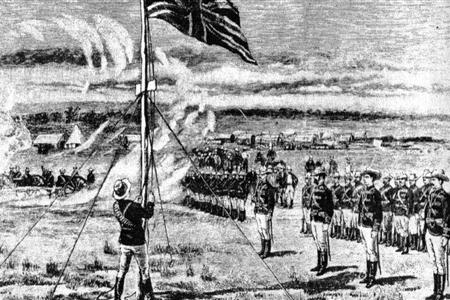 In compliance with the Orders of the Day issued by Major Frank Johnson, the Pioneer Column paraded at 1000 hours on Saturday 13 September 1890, dismounted and in full dress, to celebrate their arrival in this new country, and to name the place where they had halted Fort Salisbury, after Lord Salisbury, the Prime Minister of Great Britain. Assembled in front of a roughly-hewn pole from a Msasa tree were A and B Troops of the Pioneer Column; C Troop with two 7-pounder guns at the ready; and B Troop of the BSAP on the left. The site would henceforth be called Cecil Square.

The honour of hoisting the flag was bestowed upon Lt. E.C. Tyndale-Biscoe RN. Also stood by the flagstaff were Lt. Colonel Edward Pennefather, commander of the BSAP, Capt. Sir John Willoughby, second in command of the BSAP, and Lt. Sidney Shepstone, ADC to the commander. The BSAP Chaplain, Canon Francis Balfour gave a prayer of thanks, which was followed by a twenty-one gun salute and a march past by those on parade.

The column had crossed the Shashi River into Lobengula’s territory on the first day of July that year, laagering close to the river at a spot where Fort Tuli would be constructed. The onerous pathfinder responsibilities for ‘cutting the road’ initially rested with B Troop, accompanied by Frederick Courteney Selous and Dr L.S. Jameson. Progress was slow through the unchartered territory; the column’s every move under close scrutiny from Matabele warriors acting under instructions from their king in GuBulawayo. Consequently, the column had to go into defensive laager every night, using the sixteen-horse-power steam engine powered searchlight for added security.

On 17 August, having a few days earlier crossed the Tokwe River and dynamited their way through what they christened Providential Pass, the column laagered at what became Fort Victoria. As the column ventured away from direct Matabele influence and into the land of the Shona tribes, the atmosphere became more relaxed and Maj. Johnson condoned hunting for fresh meet. On Tuesday 2 September, in bitterly cold and wet conditions, the column arrived at the headwaters of the Umniati River, selecting a suitable site to establish Fort Charter. This new garrison was left in the control of Capt. Maurice Heyman and A Troop of the BSAP.

Night marches were also undertaken as tensions associated with the presence of amaNdebele warriors were left behind. A week later, the column outspanned on the Umfuli River, where a Berthon boat (a double-skinned canvas craft), carted all the way from the Cape, was sailed up and down a pool in the river. On Thursday 11 September, the weary column, having left the railhead in Kimberley almost five months ago, double-spanned all 117 wagons across the Hunyani River, just sixteen miles away from their final destination at Mt Hampden. During a much needed rest at the Makabusi River, Major Johnson scaled a nearby kopje to see how far they were from Mt Hampden. However, it was not the sight of the distant hill that drew Johnson’s attention, but the presence of a good supply of water and open plains of rich red soil in the immediate vicinity. Fetching Rhodes’ proxy, Jameson, to share his discovery with, a decision was made to select the spot on the Makabusi to end Johnson’s contract and to call the site Salisbury, after the 3rd Marquis of Salisbury.