Reflections on an Unseen Enemy… 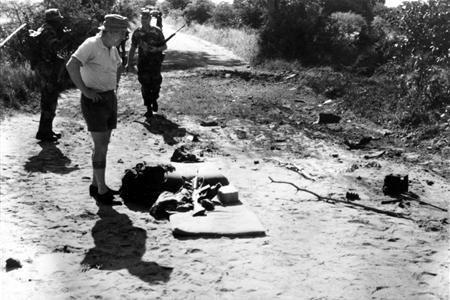 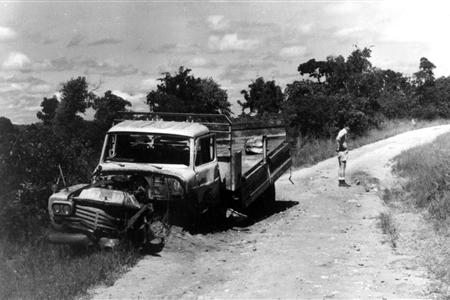 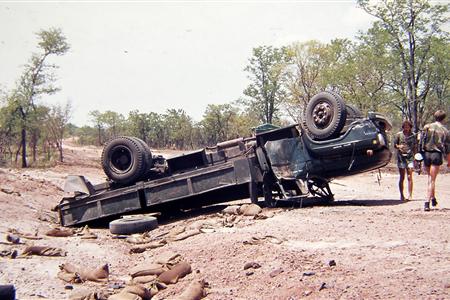 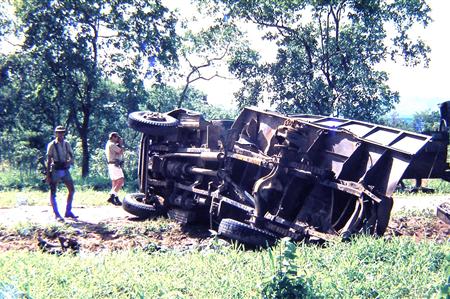 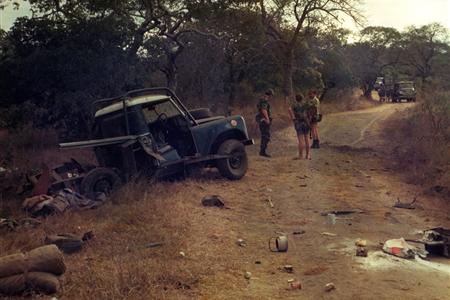 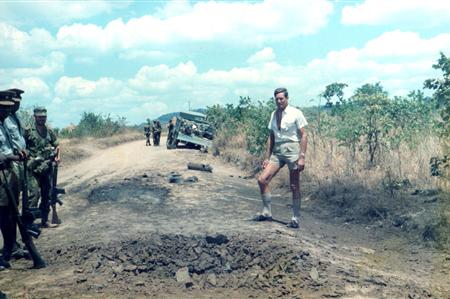 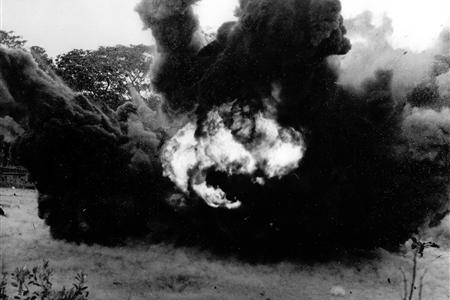 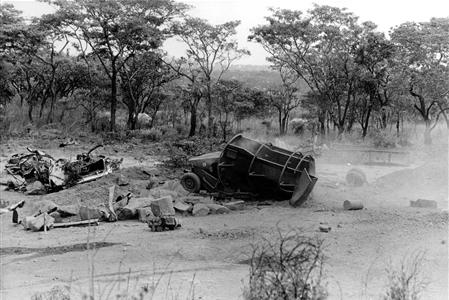 Above left: A test landmine detonation at the testing facility near Salisbury

Above right: A still smouldering Rhino after the blast

An intense fireball surrounded by black smoke, choking clouds of dust and metallic debris – the signature of the devastating force of a landmine detonation. In the aftermath the dust settles and a stricken mine-protected vehicle lays several metres from the site of the blast, one set of rear double wheels and the fuel tank separate from the capsule which is largely intact.

This was one of many tests conducted by the Rhodesian authorities and commercial contractors at the Cleveland Range just outside of Salisbury. This particular test, carried out in 1978, concluded that occupants in the capsule would most likely have survived the blast, further evidence that the Rhodesian Forces were more successfully countering the threat from landmines with an array of “home-made” protected vehicles.

Early in 1971, an RLI Ford F-250 truck detonated a landmine just across the Mukumbura River in Mozambique, resulting in the deaths of Trevor Wentzel, Leonard Moorcroft and George Meyer, all of Support Group, the Rhodesian Light Infantry. Three others survived. They were the first Rhodesian landmine casualties. The first civilian landmine incident occurred in the Mana Pools Game Reserve when farmer Maurice Ellement and his family detonated a ZIPRA-laid landmine. Incredibly, they all survived, his wife and son unscathed, but Mr Ellement later lost a leg as a result of the explosion. Two other children in the car sustained minor cuts. Their car was a Citroen DS19, an unconventionally designed car for its time, but the “veldskoen” shape saved their lives, as the front right wheel detonated blast was far enough away from the passenger cab so as to largely miss its occupants.

The Bush War would witness the design and manufacture of a plethora of mine-protected vehicles, from the early Land Rover based Rhino to the large troop carriers such as the Crocodile and the Puma. Individuals such as Don Hollingworth and Dave Perkins of the BSAP were leading pioneers, particularly in the conversion of Land Rover chasses in a way which would offer the occupants greater safety. Standard Land Rovers with roll-bars and armour plate protected cabs were common place, as were the more robust capsule-protected Rhinos.

Above left: A Government Land Rover after detonating a landmine near5 Rusambo on 22 July 1974

Above right:  DC Rushinga, J. Whenman by a crater after a landmine detonation under a BSAP truck, Chimanda TTL

“Being the driver, I felt that the Land Rover lifted suddenly into the air and was completely uncontrollable. A loud sharp crack accompanied thick dust and sand in an upwards-swirling mass, both in and outside of the Land Rover. Bits of metal flew all over in all directions. Hot oil from the engine came up through the now almost non-existent floorboards and burnt into the skin of the back and inside of my thighs. The windscreen became cracked in hundreds of places and became an instant opaque dull colour, covered with the mixture of water from the radiator and the dirt. My safety belt snapped, and once the Land Rover came to earth with a thud, the driver’s door crumpled like tissue paper, and the glass window disappeared in a puff of dust and smoke. My rifle was jammed between the accelerator pedal and the now buckled door and, in fact, was also a bit bent in the process. The anti-tank land mine was detonated by the right front wheel directly in front of my feet. Only the metal mine protection plate was between me and being converted into instant mincemeat. Later I discovered from the sappers that the mine had been a Russian TM 57 type. Rob was still sitting in the passenger’s seat. He had been holding his FN rifle between his legs with the butt resting on the floor between his feet. The impact of the land mine had lifted his rifle and it had hit Rob in the face. The flash eliminator had gone into the socket of his eye and had forced the eyeball to pop out. It was now dangling on the end of some sinew in the vicinity of his nose and there was blood everywhere. The escort vehicle behind us had stopped in the meanwhile and the DAs had debussed and taken up all-round defence. As per drills they had fired several rounds into the thick undergrowth along both sides of the road. I tried to get my rifle out of the now totally destroyed Land Rover, but could not do so due to its new shape and position. Luckily I also had a pistol with me, but it was of little comfort. In the meanwhile, more rounds were being fired and I was not quite sure if we were now being ambushed. Poor old Rob got out of his side of the Land Rover and was yelling to me to sort his eye out. I tried to shove the eyeball back into the socket but it did not work as the sinew was too long and got in the way. I wrapped a shell dressing over it and told him to hang on. All he wanted to know was if it was bad. Naturally it was, but I could not really tell him this, as there was no time for idle chitchat. We had not yet been issued with decent radios, so I consolidated our position, appointed the sergeant to take charge and defend the scene, and then ran off with a lance corporal on foot to a business centre some four kilometres away to use their telephone. We got through quickly and by the time we got back to the scene of the incident an Air Force Alouette helicopter was circling to land. Rob was casevaced and we were picked up by vehicle after the sappers swept the road again. The Land Rover was recovered later but was never ever the same again!!”

Above: Extensive landmine damage to Intaf trucks on the Kanyemba road, Sipolilo

Ernest Konschel would lead the field in the development of a monocoque vehicle, characterised by offset front and rear wheels and engine, thereby moving the main impact of the blast away from the armoured capsule and its passengers. His efforts culminated in the birth of the ubiquitous Leopard, used by the security forces, government departments and commercial farmers alike. Konschel, who would also design the mainstay of the Engineers mine-detecting equipment, the Pookie, was awarded the Medal for Meritorious Service in recognition of his outstanding work in this field.

During the eight years of the Bush War, passenger fatalities from landmine detonations involving mine-protected vehicles amounted to less than two percent, attesting to the effectiveness of Rhodesian innovation. Tragically however, and as is inevitably the case in any situation of conflict, the innocent suffer the most. Fatalities resulting from landmine explosions where unprotected, mainly civilian vehicles, were involved, amounted to twenty three percent.

Above left: An ADF Isuzu truck after detonating a landmine in the Rushinga area, 06 February 1975

Above right: Provincial Commissioner Bob Woollacott inspects the site of a landmine blast in the Pfungwe TTL, Mrewa, March 1975