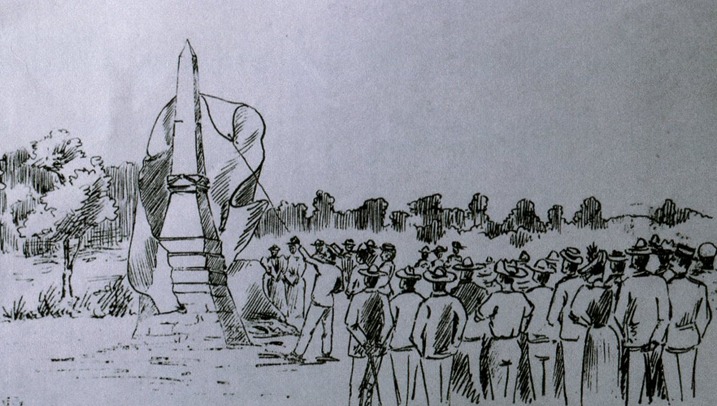 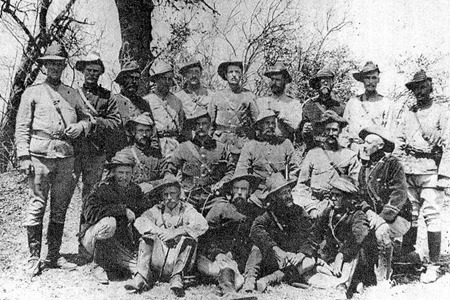 On 18 July 1893, having only just arrived at Ft Victoria from Ft Salisbury the day before and therefore in a no-nonsense mood, a saddle-sore Dr Leander Starr Jameson (he had on-going problems with piles) informed King Lobengula’s belligerent induna Manyao and his number two Umgandan, that he would no longer tolerate the unrestrained hostilities of the 3,500 strong amaNdebele impi against defenceless Mashona. The butchering of those that Lobengula considered to be his slaves, amaholi, had to cease immediately, and the impi was to withdraw across the ‘border’ within the hour, or face being driven across by force. The impatient Dr Jim tasked forty men under a Captain Lendy to ensure compliance. Lendy found the hot-headed Umgandan pillaging and creating general mayhem during the impi’s westward retreat, and at Magomoli’s kraal, in circumstances which remain unclear, the vastly outnumbered BSA Company men opened fire on the amaNdebele, killing about thirty, including Umgandan. It is still generally accepted that this action precipitated the so-called Matabele War of 1893, when in October of that year, a column from Ft Salisbury joined the Victoria Rangers from that fort at Iron Mine Hill, to advance on GuBulawayo and take over Matabeleland.

Seated in the middle, second from the left in this group of the Victoria Rangers, Capt Charles Lendy, and to his left, Capt Allan Wilson

Charles Lendy, three sisters and his younger brother Edward (killed in action in Sierra Leone), were all born in Sunbury-on-Thames in England, where their French-born father, Major Auguste Lendy, had established the Institution for Practical Military Education, a preparatory college for potential Sandhurst applicants. Born on 7 January 1863 and educated in France, Germany and at Harrow, the athletic Lendy was commissioned into the Royal Artillery, before serving in Gibraltar and Bermuda.

On 16 May 1893, he was seconded to the British South Africa Company, sailing for Cape Town straight away. He would command an artillery platoon, following the Pioneer Column after it had left Bechuanaland for Mashonaland. Upon the disbandment of the Pioneer Column in Ft Salisbury, like all the other members of the unit, Lendy claimed his promised reward of land. The beneficiary was simply allowed to claim ownership of land that was measured in terms of the distance a man on horseback would cover a day, in each direction of the compass. Later land surveys revealed that Lendy ended up with a vast tract of some 70,000 acres in the Marandellas area.

Prior to being appointed magistrate of Ft Victoria, an administrative rather than a legal position, Lendy was involved in a number of punitive patrols in Mashonaland against ‘problematic’ Mashona tribal heads, including one which resulted in the death of Chief Ngomo (sic) in 1892. During the raid on a kraal, to find an individual who had stolen from a Mr Bennett, 21 civilians were killed, an incident which remains a subject of debate and contention to this day.

Upon his death, Lendy, a master of Maxim machine guns and cannon at carious engagements against large numbers of amaNdebele warriors, became both hero and villain, criticised in the House of Commons for disgracing the name of an Englishman. Shortly before his death, Lendy had written to Hiram Maxim, the gun’s designer, informing him that his weapon had performed “admirably throughout, although very inferior ammunition was sometimes used.” He added that he did not have any stoppages.

Lendy died in Bulawayo Hospital on 13 January 1894, of causes which are also still debated. It is generally accepted that he died of medical complications arising out of an internal injury sustained while competing in the shot putt. Lendy was a fitness fanatic, invariably carrying around dumbbells for weight training. Some believe it was a case of over indulgence at the hotel at Tati, and the conspiracy theorists would have it that Lendy was poisoned by Dr Jameson, in an attempt by the latter to prevent Lendy from giving evidence at the inquiry into the circumstances at Ft Victoria which gave rise to the Matabele War.

Lendy would, however, for reasons not fully understood, be memorialised in both Rhodesia and England. An obelisk-style memorial was erected in his memory in what was to become the Centenary Park, Selborne Avenue, Bulawayo, carrying the inscription:

TO THE MEMORY OF

IN THE 1ST MATABELE WAR,

THIS MONUMENT IS ERECTED

BY HIS FRIENDS & COMRADES

In the Church of St Mary’s in Sunbury-on-Thames, a brass plaque can be found, in memory of the two Lendy brothers, and in the nearby two-acre Walled Garden, there stands an imposing lion memorial, erected in memory of these two local ‘heroes’.

The epitaph on the Lendy lion memorial reads:

TO THE MEMORY OF CHARLES FREDERICK LENDY CAPTAIN RA

WITH INDEFATIGABLE ZEAL AND CONSPICUOUS BRAVERY

Full acknowledgement with grateful thanks to Alan Doyle for his assistance in the research into this early Rhodesian. Alan, an ex-Rhodesian who lives in Sunbury-on-Thames, came across these local Lendy memorials quite by chance. In addition, the book Own Goals by Roger Marston, self-published in 2009, is acknowledged as an additional source, and is recommended for further reading.

Photo by Alan Bryant of Lendy's grave in the Bulawayo Cemetery 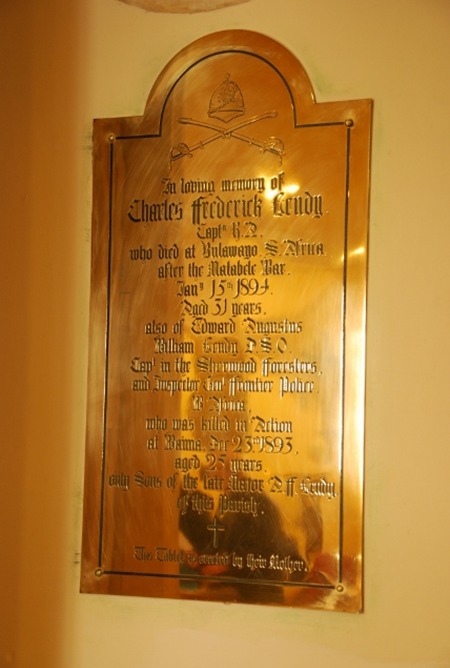 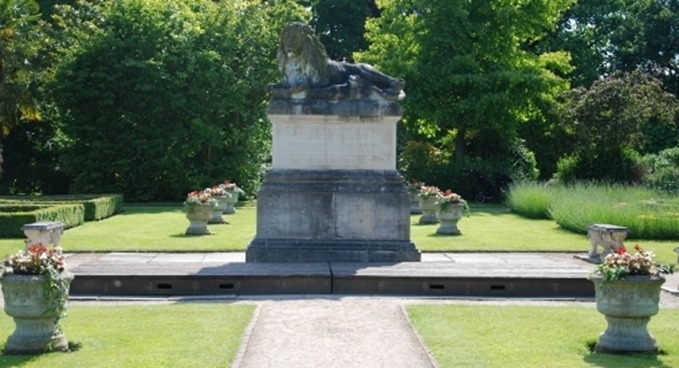 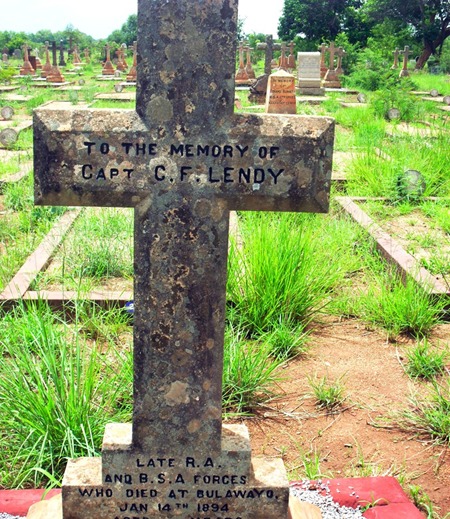