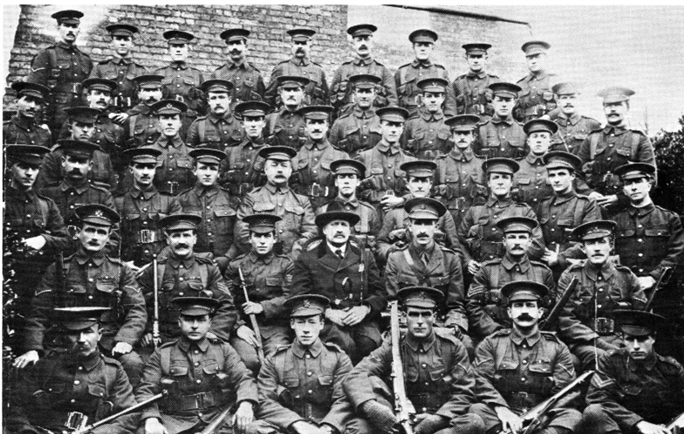 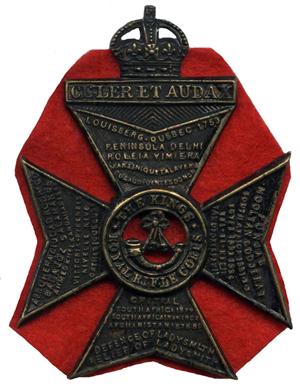 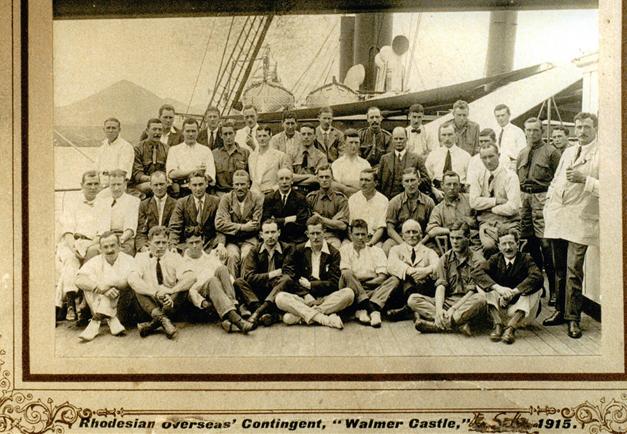 During World War I the small colony of Southern Rhodesia again rallied to the call of the Empire, this time to assist with combatting German expansionism in Europe and Africa. Typically, the pro rata contribution would exceed that of other colonies and dominions, as men of varying ages volunteered for active service. This saw the formal, but brief, formation of two Rhodesia Regiment battalions, but significant numbers also volunteered to serve with British and South Africa units in Europe, effectively under the colours of foreign armies and not those of any Rhodesia unit. As a consequence, their actions as individuals in the muddy, blood-soaked trenches of France and Belgium are not always as well documented as those who served with the 1st and 2nd Battalions of the Rhodesia Regiment.

On 22 October 1914, the Legislative Council of Southern Rhodesia passed a resolution allowing for the recruitment and training of one thousand men “…to be placed at the disposal of the Imperial Government for active service in this territory or elsewhere.” Two infantry units, the First and Second Rhodesia Regiment, were formed on this basis, the former seeing active service in German South West Africa, assisting Union troops to quell the Rebellion, and also marching with General Louis Botha against German forces in this part of Africa. The Second were deployed to German East Africa where, under the leadership of Major Algernon Capell DSO, they were engaged in numerous battles against the Germans. 1RR was disbanded at Cape Town in July 1915, and 2RR in July 1917 upon the return of the decimated Battalion from East Africa. However, men from these two units and other Rhodesians wished to further contribute to the war effort, so as individuals they signed-up with South African and British army units for deployment in Europe. Others would enlist as officers in the Rhodesia Native Regiment, serving in the Nyasa regions of German East Africa. Individual Rhodesians served with more than a hundred of the British Army units deployed in Western Europe. Many were attached to South African Infantry Regiments, while others enlisted in groups with battalions of the Kings Royal Rifle Corps (KRRC), forming what were referred to as Rhodesian Platoons, numbering approximately sixty men.

Cap Badge of the King's Royal Rifle Corps, very similar to that of the Rhodesia Regiment, including the red backing

One such group, pictured above, left South Africa on board a Union Castle passenger ship, the Walmer Castle, in late 1915. What is of particular interest is the general mature age of the men in this photograph; Martin Doyle was 29 years old at the time of his enlistment with the KRRC on 17 November 1915. By 1915, Rhodesian recruits had already become associated with the 2nd Bn KRRC, which had its own “Rhodesian Platoon.” Training took place at the Corps’ depot at Sheerness in Kent. In January 1916, R/16943 Rfn Martin Doyle, as a member of the Rhodesian Platoon, 2KRRC, arrived in Dunkirk on the French Coast. The Battalion was one of four which formed the 2nd Brigade, 1st Division, responsible for holding the Loos Sector between Laventie and Vimy. The horrors of the Western Front trenches became a nightmare for the Rhodesians, including those 2RR veterans who had survived the hardships and disease of East Africa. Just prior to Doyle’s arrival in The Triangle that symbolised the Loos, in September 1915 there were 61 000 casualties in just one battle, including 7 760 killed. This futile loss of life was a tragic and costly price paid for almost no military gain. A cousin of Winston Churchill and a Captain in the Rifles Brigade, Norman Leslie, wondering if the only way to victory had to be the stalemate and slaughter of trench warfare, felt there had to be an alternative to “chewing barbed wire in Flanders.”

By the end of that year, an unbroken line of trenches snaked from the North Sea to the Swiss border, mile upon mile of ravaged farm and wood that had seen the death of tens of thousands of soldiers. But since the start of 1915, the line had hardly changed. During this time, Rhodesian strengths were largely depleted, but a continuous flow of volunteers from home soon swelled numbers up to a level allowing for the formation of two platoons, one being deployed to Salonika in Greece with 3KRRC. But by the beginning of 1917, Lt AH Minter, who also appears in the Wilmer Castle group photo above, reported that his platoon had been reduced to 26 men. In mid-1916, in the build-up to the Allied offensive on the Somme, the Rhodesian Platoon with 2 KRRC suffered huge losses at Fosse and Wood Lane, reducing its strength to less than twenty. However, fresh recruits continued to arrive, and on the eve of the major offensive on the Somme, the Rhodesian Platoon numbered ninety. At the end of the following day, only ten of these men were alive and unwounded.

More than 19 000 British troops were killed on that one day. Fortuitously, Doyle, now promoted to Lance Corporal, was convalescing in a London Hospital when his comrades went over the top at The Somme on 1 July 1916. In a selfless act, Doyle had picked up a German trench mortar which had landed amongst a group of wounded soldiers, but as he lobbed the bomb it exploded, resulting in the loss of his hand. For his bravery, he was awarded the Distinguished Conduct Medal, one of only 69 awarded to the 5716 white Rhodesians who fought in Europe. Doyle was consequently retired from the army in March 1917, on a pension of 25/- a week.

Three years later, records from US Immigration on Ellis Island in New York reveal that Doyle had arrived in the USA, on board the SS Olympic, twin sister steamer to the Titanic. He died in Hartford, Connecticut on 29 March 1932. The historic threads of these Rhodesians in Europe during WWI are almost lost amongst the hundreds of memorials that are scattered throughout the battlefields of France and Belgium. The Menin Gate Memorial at Ypres, carries the names of 54 338 British and Commonwealth soldiers killed in the Ypres Salient and whose bodies were never found. Included in this tragically mind-boggling figure of fallen with no known graves, are five 2nd Bn Rhodesia Regiment German East Africa veterans: Sergeant Sydney Hubie and Privates Andries Ackermann, Hubert Gowing, John Kelleher and Raleigh Wright. All were serving with the 1st and 2nd South African Infantry Regiments at the time. The Pozieres Memorial lists 14300 British and South African soldiers with no known graves, killed during the Battle of the Somme. Included are a further six ex-2RR men, CSM William Ross, Sgt William McIver, Cpl Alexander Powrie and Privates Harry Gould, Arnold Goudie, and John Shakeshaft.

What of course is also easily forgotten is the devastation caused by the so-called Spanish Flu pandemic, which struck from January 1918 through to the end of 1920. No corner of the globe escaped this malady, with an estimated 27% of the world’s population becoming infected over this period, and although accurate figures were therefore difficult to assimilate, it is reckoned that at least 50 million died (as high as 130 million) from influenza complications such as pneumonia. I am currently working on the Roll of Honour for the Rhodesia Native Regiment, the First World War fore-runner of the Rhodesian African Rifles. The RNR, like its successor, was an African regiment led by white officers and NCOs drawn from the BSAP, the disbanded Rhodesia Regiment battalions and the Native Affairs Department. Tragically, as the chart reveals very graphically, the RNR battalions serving in Nyasaland, Portuguese East Africa and German East Africa, lost enormous numbers of troops to pneumonia in 1918. A staggering 77% of deaths were due to illness and disease, almost entirely from influenza-related pneumonia. They remain where they died in cemeteries in modern day Malawi, Mozambique and Tanzania, and remembered on the Harare Memorial in the Pioneer Cemetery.