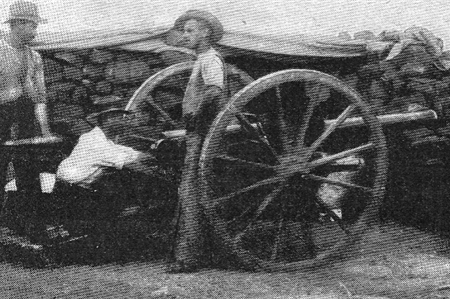 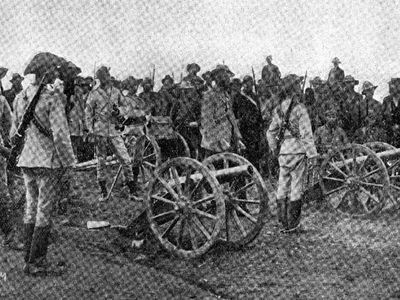 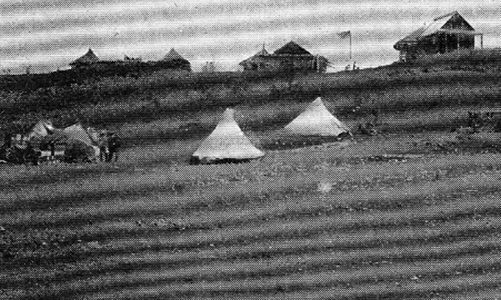 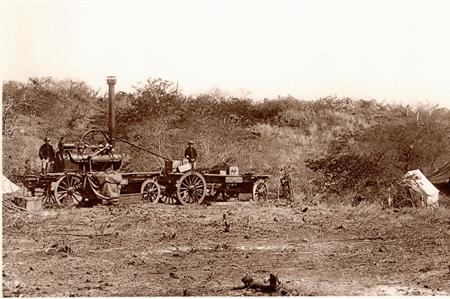 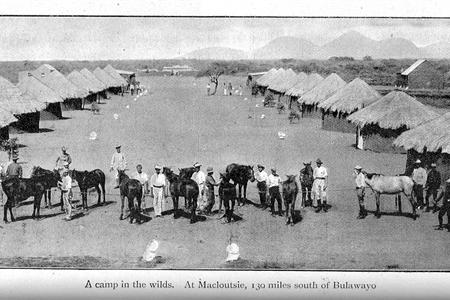 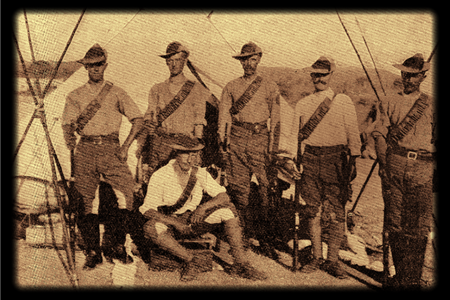 The siege of Mafeking, commencing on 14 October 1899, found Lieutenant Colonel Herbert Plumer with only 500 men to defend the Rhodesian frontier of as many miles in length.

Above right: Members of the Rhodesian Horse at Ft Tuli

His command initially consisted of five squadrons of the Rhodesia Regiment, and about one hundred men of the British South Africa Police. The force would be added to later, but in October of that year all they had in support was one 12.5 pounder Maxim Nordenfelt, two 2.5” muzzle-loading screw guns, and two Naval carriage-mounted .45 Martini-Henry Maxim guns.

Plumer identified six vulnerable points on the Limpopo River, in the form of drifts, which would allow the Boers easy access into Rhodesia. These included Rhodes Drift, Pont Drift, Masibi Drift, Middle Drift, and the junctions of the Limpopo with the Maklutsi and Shashi Rivers. Conditions along the front from Mafeking to the Portuguese border were potentially as hostile as that of the Boers. The Limpopo, typical of so means African rivers, was very seasonal, allowing for crossings to be made virtually anywhere during the dry season. Riverine woods and thickets of thorn scrub made reconnaissance dangerous and surprise easy. Craggy kopjes would make attacks on an enemy position extremely difficult.

By 16 October, elements of the 1300-strong Zoutpansberg Kommando, based thirty miles south of Rhodes Drift on the Brak River, were operating in the area. With the arrival of five hundred Boers opposite Pont Drift, Plumer redeployed A Squadron, Rhodesia Regiment, to bolster his forces at this crossing. On 21 October, a reconnaissance patrol from A and D Squadrons encountered a large force of Boers about a mile south of the drift and, in an ensuing skirmish, Sgt Major George Yonge and Trooper Geo Nethercott of D Squadron were killed. Nethercott was the first Australian to die in the war. Captain L Blackburn also of D Squadron and Trooper Henry Levy of A Squadron both died of their wounds en route back to Ft Tuli.

Arising out of this action, and based on reports of significant Boer advances from both the west and the east, Plumer made the decision the following day to consolidate his defensive position at Ft Tuli, ordering the squadrons at Rhodes Drift to fall back on Tuli. However, within days the Boers inexplicably withdrew the bulk of their forces towards Pietersburg, allowing Plumer to despatch a squadron under Captain K MacLaren to Maklutsi Village to monitor the western approaches. On 27 October, feeling more confident of spreading his limited manpower to cover a wider area, a squadron under Lt Colonel J A Spreckley was sent back to Rhodes Drift and another under Major W Bird to the Limpopo/Maklutsi confluence.

Spreckley would be killed in action in August the following year in an action against the Boers at Klip Drift. Scouting patrols across the Limpopo at Pont Drift revealed that the Boers still occupied some of the kopjes, but in reduced numbers. However, this lull was as tenuous as Plumer’s thin line of defence. The Boer commander of the whole military district, Assistant General Grobelaar, concerned about a threat from the north, supplemented van Rensburg’s commando with a further six hundred men.

On 02 November 1899, a 400-strong Boer commando, with two guns, crossed into Rhodesia at Rhodes Drift, heading for Fort Tuli.

They circled around Lieutenant Colonel J.A. Spreckley’s squadron, which was camped about a mile north of the drift, and continued towards their objective. Near Bryce’s Store, the Boers encountered a convoy of eight wagons bound for Spreckley, easily overwhelming the escort of twenty-six men, resulting in the loss of an officer, Chaplain Rev. J.W. Leary and six prisoners. The remainder, including four wounded, managed to evade capture and headed for Tuli.

Spreckley’s postion was now critical, with his line of retreat cut off and his rear defences exposed. Shell fire decimated nearly all of his animals and defeat seemed inevitable as the squadron waited for nightfall under sustained rifle fire from the Boers. However, the Boers did not press home their attack, and as darkness fell, Spreckley’s men made their way downstream towards Massibi’s Drift. From there they struck north, moving around the Boers, and arrived at Tuli early the following morning. The Boers had lost three men, but had taken nine wagons, seventy horses and one hundred mules, the extra wagon being one from Major Bird’s detachment at the Macloutsie confluence.

After shelling Spreckley’s evacuated position and discovering their quarry had left during the night, the Boers entrenched themselves at Bryce’s Store, in anticipation of the assault on Tuli. Plumer also recalled Major W.D Bird and his squadron back to Tuli, in anticipation of an attack that he believed was inevitable. However, procrastination and divided counsels, factors which would significantly hinder the Boers prosecution of the whole war, stalled any further northward movement of the commando. Assistant General Grobelaar strongly advocated the capture of the Rhodesian forces in Fort Tuli and the destruction of the western rail line, thereby securing the northern frontier.

Pretoria however believed that this was of no real strategic value and that the Boers efforts had to be concentrated in Natal and the Cape Colony. Grobelaar was instructed to merely observe the river line, even losing his commando which was ordered to ride to Pretoria. He had to content himself with three static deployments of four hundred men and a gun each at Saltpan, near the Zoutpansberg, Palala River opposite Selika, and Matlabas River opposite Palla. Patrols would connect the three hundred mile gap between the post at Sekwani and Rhodes Drift.

The Boer detachments were subsequently further redeployed elsewhere, and by 27 November, Plumer’s scouts found that all the drifts had been evacuated, with only a small remnant of the original force lingering in the Brak River area. Plumer led a reconnaissance patrol across the Limpopo towards Pietersburg, finding the parched and bone dry country clear of the enemy.

After an exhausting march, Plumer returned to Tuli to consider his next course of action. Based on the distance to Pietersburg through countryside with very little water, Plumer made the decision to repair the western line in anticipation of re-establishing communications with the besieged town of Mafeking. 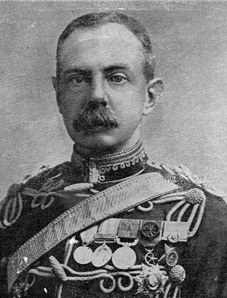