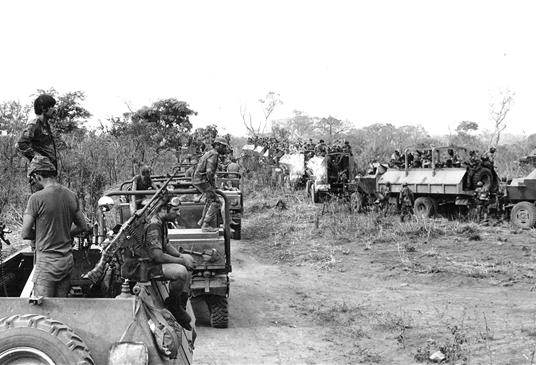 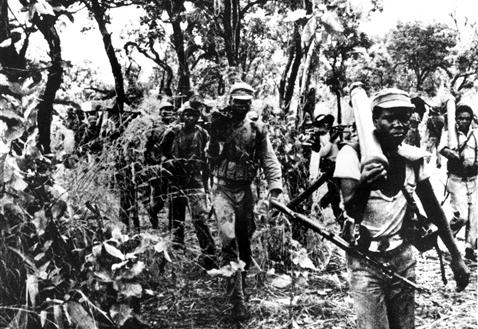 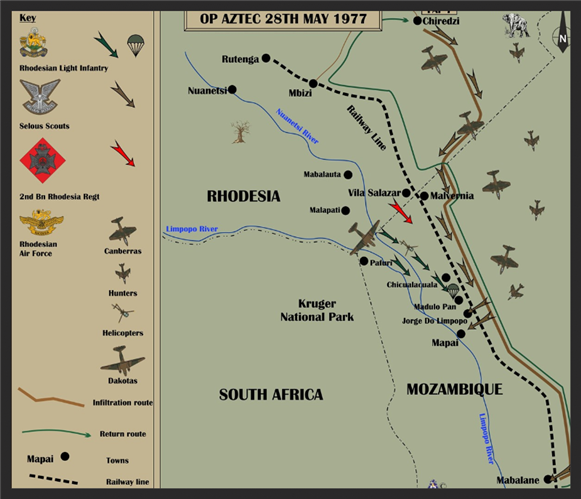 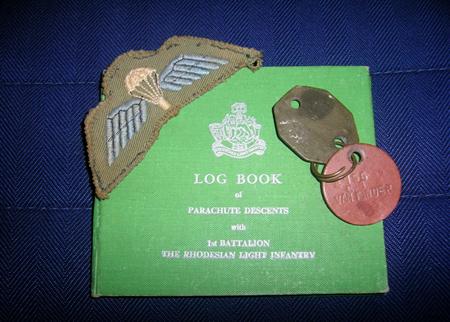 Operation Aztec was launched at the end of May 1977 with the objective of disrupting ZANLA incursions into south east Rhodesia. It would be a combined operation, comprising elements of the 2nd Battalion, Rhodesia Regiment; 2 Commando, 1st Battalion the Rhodesian Light Infantry; the Rhodesian Corps of Engineers; No’s 1, 3, 4, 5 and 7 Squadrons of the Rhodesian Air Force; and the Selous Scouts. The plan would be for 2RR to strike a short distance into Mozambique, neutralising any insurgent staging posts they may encounter in the area. At the same time, there would be a two-pronged deployment of RLI troops, one by helicopter to a ZANLA camp known as Rio, with an estimated strength of 150 ZANLA, and the other to be parachuted into Madulo Pan, the site of another ZANLA base. A Selous Scouts flying column would penetrate along the railway line as far as Jorge do Limpopo, destroying ZANLA camps on the way. They would base-up for three weeks and send forces to attack camps at Mapai and Pafuri. Vital air attack and logistical support would be provided by the Air Force.

As night fell on 28 May, Captain John Murphy led the 110-strong Selous Scouts flying column as it crossed into Mozambique. Vehicles included heavily-armed Unimogs, home-made Pigs, a “liberated” Willy’s Jeep and a ten-tonne DAF. Weaponry included 81mm mortars and a Russian B19 recoilless rifle. At the head of the column, Engineers cleared the bush track in the direction of the Cabora Bassa powerlines. As the successful troops from 2 Commando were being airlifted by helicopter from the ZANLA camp at Rio to return to Buffalo Range in Rhodesia, they encountered small arms ground fire. This resulted in Trooper Chris “Bobo” Edmunds, who because of his height had been sitting in the front near the tech, being shot and killed.

At 1100 that morning, Canberras of No 5 Squadron put in air strikes at Madulo Pan, which were followed immediately by a ground assault by 24 paratroops of 2 Commando, RLI. After 45 minutes of tree-top flying from Rhodesia, the pilot of the Dakota carrying the paratroops eased his aircraft up to 500 feet, the jump height for this infiltration. As the troops hit the ground and took cover, they were surprised to be met by an eerie silence. They had expected fierce resistance, but as they advanced in a sweep line, it was soon evident that the camp had been evacuated in a hurry, with tracks leading off to Jorge do Limpopo. Had they been forewarned? Satisfied that the RLI had matters taken care of, the flying column, supported by further Hunter air strikes, took the town of Jorge do Limpopo, only to discover that the main ZANLA base had been moved back to Mapai. However, large quantities of equipment, vehicles and stores were captured. The decision to strike again at Mapai was quickly ratified by General Peter Walls who, dressed in shorts and a T-shirt, had joined Lt Colonel Ron Reid-Daly at the Inkomo Ops Room to follow the progress of the external operation. To safe-guard his escape route, Murphy was instructed to uplift the RLI paras from Madulo Pan to garrison Jorge do Limpopo so that he could lead the Scouts south to the ZANLA stronghold at Mapai.

The waiting RLI troopers split up amongst the vehicles of the flying column, squeezing in next to big bearded men they referred to, although not to their faces, as “Woollies!” The clearing and subsequent securing of Jorge do Limpopo by the heavily-armed column had been brutally quick and efficient. Twelve RLI troops, continued on to Mapai with the Scouts, leaving the remaining twelve, Stops 6,7 and 8, to hold the position until the column returned. These twelve soldiers set up an ambush position in the only available cover, a clump of trees just north of the town. As they lay in a line some fifty metres from the road, they soon saw a large group of fifty to sixty well-armed ZANLA moving down the road. They were spread out, so attack by the RLI men would have been extremely risky. No sooner had the Rhodesians radioed a Lynx for assistance when they came under a barrage of mortar and small arms fire. They had been compromised. Nightfall brought no respite, as only the tree canopy above their heads seemed to prevent incoming mortar bombs from exploding amongst them in their 360 degree defensive position. Day two saw the men desperately continue to hold their tenuous position, tired, thirsty and hungry. That night they heard a train arrive as the enemy continued to reconsolidate its position in the town they had vacated earlier. Retreating further into the relative shelter of the trees during the following day, the men continued to repel small groups of ZANLA moving towards their position, finally using their 2” mortar to unsettle the enemy as to their actual strengths and capabilities. This action bought them sufficient time to urgently request air support. They were in imminent danger of being overrun.

Advising Blue Leader of their exact locstat, they suggested that the area around their position be bombed and strafed, forcing the enemy back into Jorge do Limpopo. Hunters responded with Sneb rockets and 40mm cannon fire, saving the lives of the ground troops, but the pilot could only empathise with the fact that his fellow Rhodesians had no food, little water, and were running out of ammunition. They held out for another two days before an RLI convoy of trucks arrived in a blaze of gunfire to rescue them. The sleep-deprived, hungry and thirsty commandos wolfed down the contents of FRELIMO rat packs provided by their saviours.

As this desperate situation at Jorge do Limpopo was developing, the Air Force Hunters were again providing invaluable air support, softening perimeter defences at Mapai. Securing the Mapai airstrip after a serious firefight with well-equipped elements of ZANLA and FRELIMO, the Selous Scouts column pushed on to Mapai, where they recovered large quantities of ammunition and vehicles. A Dakota of No 3 Squadron brought in a team of mechanics to repair some of the vehicles to help transport material back to Rhodesia, followed by a second flight as Captain Neil Kriel of the Recce Troop was sent in by Reid-Daly at the head of a demolition team to blow up as much of the Mapai infrastructure as possible, in an attempt to render the base unfit for future use.

Heavily armed ZANLA move through the bush in Mozambique

A third Dakota flight arrived later that evening, bringing in more explosives and mortar bombs in addition to extra men from Malapati to help hold the airstrip. At 2000hours, fully laden with captured ammunition and brand new tyres, Skipper Jerry Lynch applied full throttle to coax the Dakota off the airstrip which was being lit up by truck headlights and strobe lights. Lifting barely ten feet off the ground, the aircraft came under small arms fire from out of the dark. Moments later, an RPG7 rocket struck the starboard engine. Lynch’s only option was to cut the port engine to stop the aircraft yawing, and to bring it back down. The interior was now on fire, as Lynch brought the crippled Dakota to a halt just before a line of trees. Only then, taking stock of their situation, did he realise that his co-pilot, Bruce Collocott, had been fatally shot. As flames engulfed the aircraft, Lynch and his other crew member, Flight Sergeant Russell Wantenaar, got out and ran for cover, armed only with a pistol. The bright light given off as the Dakota exploded, revealed a screaming and swearing Capt John Murphy running towards them, leading two Scouts vehicles and firing his pistol into the trees.

The following morning, Captain Charlie Small (Killed in Action in Mozambique on 6 September 1979 when Puma 164 was shot down) and Lieutenant Chris Gough were choppered in to blow up and destroy what remained of Dakota R3702. This World War II workhorse was the country’s first Dakota, purchased from South Africa in 1947 at a very low price at the behest of General Jan Smuts, whose personal plane it once was. Again leaving the RLI protecting Jorge do Limpopo, the Scouts convoy continued to strike south to Mabalane. As they went, Charlie Small and his explosives team demolished as much of the rail line infrastructure as, so as to ensure that ZANLA cadres could not be trained in to Mapai. Judging the operation to have been a success and under increasing pressure from South Africa for the Rhodesian troops to be withdrawn from this sovereign state, Murphy recovered his men safely back to Rhodesia, destroying further sections of railway line and laying booby-trapped landmines as they progressed. Waiting to welcome back the weary, unwashed soldiers as they got off the vehicles, were General Peter Walls, Air Vice Marshall Mick McLaren and Minister PK van der Byl.

Typical heavily-armed "Pig" (foreground) and Unimogs employed on external raids; this one on Op Miracle