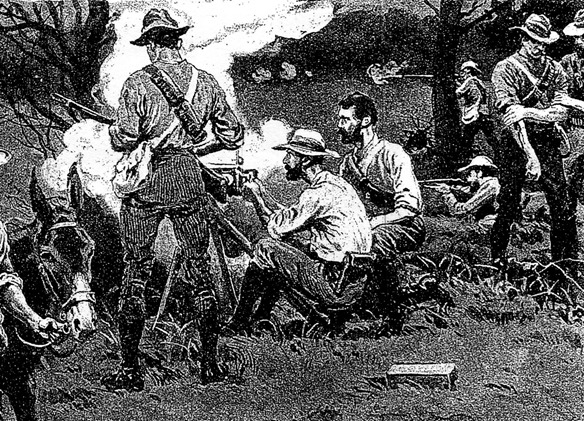 “In the dawn I took members of my brigade to find the straightest pole we could find from the surrounding Msasa trees. Most branches were crooked, distorted by veldt fires. It did not take us too long to find a suitable pole. We rigged halyards and stays as we erected it in the middle of the site chosen for the fort. He (Major Frank Johnson) had given me the honour of actually raising the flag. Being a naval man, there was no danger of the Union Jack being raised upside down.”

This extract from the diary of Lt Edward Carey Tyndale-Biscoe refers, of course, to the events at Fort Salisbury on 13 September 1890, but who was this man?

Born on 29 August 1864, Tyndale-Biscoe was the fifth of eight children of William and Eliza of Holton Park House in Oxfordshire. Enlisting in the Royal Navy as a cadet at the age of 14 years, Tyndale-Biscoe was promoted to Midshipman early in 1881. Thereafter, he served on various ships, sailing in the Mediterranean and the Indian Ocean. He went on to see active service in the Suez and Sudan, during which time he became proficient in gunnery. In late 1884, he undertook his Lieutenant qualifying exams, coming third overall. In September 1889, however, an unusual turn of events saw Tyndale-Biscoe being retired on pension from the Royal Navy on medical grounds. For some years, he had undergone speech therapy for a persistent stammer, a condition which, in itself, had the potential to end his naval career. But his own concerns, as navigating Lieutenant aboard the sloop HMS Icarus, about the medical health of his Captain, lead to a dramatic twist. When left in charge of the ship as the Captain went ashore at Accra, Ghana, Tyndale-Biscoe called together the crew to inform them that their skipper was suffering from syphilis, and that he felt duty-bound to report this to a higher authority. He was well aware though, that in order to do so, he would have to resign from the navy. The ailing Captain managed to get wind of this though, and sent Tyndale-Biscoe to the Fleet Surgeon for a further medical examination. The result, according to the young Lieutenant, was inevitable, but he would at least receive some form of income.

Undeterred, three months later, the 25-year old Tyndale-Biscoe walked into the British South Africa Company offices in London and presented a copy of his credentials. Having just missed Cecil Rhodes, he sailed for Cape Town, where he learnt more about a proposed BSACo expeditionary force into Mashonaland, there to mine gold. He was sent to Major Frank Johnson’s home at Sea point, where he had to prove his riding and shooting skills. Johnson, suitably impressed, appointed Tyndale-Biscoe as Lieutenant (RN retired) of C Troop where, together with the officer commanding, Captain Roach, they would be in charge of the artillery.

At an estimated speed of two and a half miles per hour, the five-mile long convoy crossed the Tuli River on 1 June 1890, bound for Mount Hampden. It was a gruelling adventure for the sailor, highlighted at the Umfuli River when he joined two others of the expedition, sailing up and down the river in a Berthon boat, brought all the way from Simon’s Bay. Local Mashona stared in amazement, including a headman called Mugabe. So it was that Lieutenant Tyndale-Biscoe had the singular honour of hoisting the Union Flag at a spot which would become Cecil Square, in Salisbury, Rhodesia.

On Saturday 27 September, Tyndale-Biscoe handed over his guns and the searchlight to the police and purchased two horses, in readiness for the disbandment of the Column. That Tuesday, Major Johnson addressed the final parade when, recalling the final orders to ‘ground arms’, ‘right turn’ and dismiss, Tyndale-Biscoe writes in his diary “It was the first time in British history that a country’s civilian population had been created by a word of command!”

‘Mesmerised’ by the prospects of mineral gold wealth, Tyndale-Biscoe formed a syndicate with the two Hoste brothers, setting up headquarters near the Kopje. Shortly after lodging claims in Salisbury, Tyndale-Biscoe joined a punitive expedition against a Chief Mutasa in Manicaland, with the objective of severing his ties with the neighbouring Portuguese to the east. The small band of pioneers, led by Captain Patrick Forbes, rapidly neutralised the situation, in the process apprehending two senior Portugues officials and shipping them off to Cape Town. After such a simple ‘conquest’, Forbes reckoned that he could also take Beira with two dozen men and proclaim it part of the new territory. Tyndale-Biscoe, Skipper Hoste and a handful of BSA Police were left in charge of the fort at the Pungwe River passage. However, a travel-exhausted rider stopped Forbes only thirty miles from Beira, with a message from Queen Victoria that his actions would trigger an international incident with her allies in Lisbon.

Southern Africa’s political complexion may have become very different! In spite of enduring a Spartan existence in Umtali, where wild honey replaced sugar and candles had to be made from beeswax, the lure of gold kept Tyndale-Biscoe in Manicaland. Ancient workings were in abundance, but there was no evidence of a mother lode. Dispirited, they started off on an extremely difficult trek back to Salisbury, having to swim oxen and horses across the swollen Odzi River and all coming down with malaria. It took them six weeks to reach Marandellas. They found the two men at Rusapi (sic) “haggard and yellow from fever.” As they reached Salisbury, they had to push through flood waters that reached the girths of their horses to get to the Kopje. The rain gauge at the police camp had, by the beginning of April, already registered fifty-four inches for the season.

By mid-1981, their gold prospecting in Lomagundi also provided little result, and on hearing on 20 May of his mother’s death in England, Tyndale-Biscoe left for home via Beira, eventually only sailing from the Portuguese settlement on 26 August. He arrived in Southampton on 17 November. After a brief interlude to pay his respects, in March the following year, he went back to Cape Town, where he discovered that Lord Randolph Churchill’s public pessimism about the El Dorado of Mashonaland, had effectively ensured that the cash-strapped mining subsidiary companies of Cecil Rhodes failed to attract any meaningful capital. In spite of this, Tyndale-Biscoe felt impelled to return to his Mashonaland interests, setting off by boat to Beira, and then walking overland to Umtali.

During the rainy season of 1892, Tyndale-Biscoe worked in Salisbury as a clerk of court. In October 1893, Tyndale-Biscoe was attached to A Troop as Lieutenant in charge of machine guns (Nordenfeldt and Gardiner), Salisbury Column, as part of the expedition to overthrow Lobengula. This volunteer position would be rewarded with the receipt of six thousand acres of land in Matabeleland, twenty gold claims and an equal share of half the cattle captured. After linking up with the Victoria Column under Major Allan Wilson at Iron Mine Hill, the force engaged the amaNdebele at Shangani and Bembesi, with Tyndale-Biscoe giving a good account of himself with a Maxim machine gun at the latter battle. Bulawayo was entered on 4 November, described by Tyndale-Biscoe “led by a former Pipe Major of the Royal Scots playing his bagpipes”.

Maxim in action at the Battle of Shangani (Image from The Graphic, London 10 March 1894, thanks Alan Doyle)

Upon his return to Salisbury, Tyndale-Biscoe extended his search for gold to the Luangwa Valley in Northern Rhodesia. Shortly after the debacle of the Jameson Raid in December 1895, the amaNdebele rose in rebellion, forcing the Rhodesian Horse, of which Tyndale-Biscoe was still a member, to muster in Salisbury. With the rank of Captain, the force under Colonel Beal and including Cecil Rhodes, who was still suffering from malaria, went to the aid of the beleaguered Bulawayo. Beal’s column had to retrace their steps to Salisbury as Mashonaland also witnessed an insurrection of indigenous tribes.

Tyndale-Biscoe saw action in the Hartley area, where he was again in charge of the guns. His Maxims “…inflicted great mortality…” upon the five hundred Mashona besieging the small fort at Hartley. As he struggled to resume a semblance of civilian life, Tyndale-Biscoe reflected on the experience which saw one tenth of the settler population killed, Sleeping on the ground with rifle at my side and awakening for the pre-dawn ‘Stand-to’ became a way of life,

"The crashing of our seven-pounder and the stutter of our Maxims set my ears ringing thereafter, indistinguishable from the Christmas Beatles in the Msasa trees. I don’t think it is normally possible to be in the saddle for so long, or to endure such hunger and thirst on occasion.”

After the Rebellions, Tyndale-Biscoe continued to prospect in the Mazoe Valley, and further afield into the Bindura area where they worked the Phoenix Prince Mine, the latter providing comfortable returns. With the outbreak of the South African War in 1899, he left his property to Skipper Hoste and set off for Durban, then joining the British Naval Brigade in a besieged Ladysmith where he manned various gun emplacements.

He arrived back in England in April 1900 to a victorious welcome, highlighted by a parade in front of Queen Victoria. Mentioned in Despatches, he was promoted to the rank of Commander in the Retired List on 24 April 1902.

The outbreak of World War I found Tyndale-Biscoe in Kashmir, visiting his brother Cecil and recovering from a broken leg sustained in a vehicle mishap. He went on to serve as a Major in the Censorship Office in Delhi, retiring in 1920.

Tyndale-Biscoe kept in touch with the country he helped establish, retaining a small mining interest and being invited at the start of each decade, commencing in 1910, to raise the flag in Cecil Square, Salisbury. He died in Dorset, England, on 13 June 1941. In his last years, he said of his beloved Rhodesia,

“While all these political issues were being dealt with, I had an uncomfortable feeling that the current and future relationship between Blacks and Whites still need some fine-tuning. In Africa, the choice between taking the high road or the low road, remains precarious.” 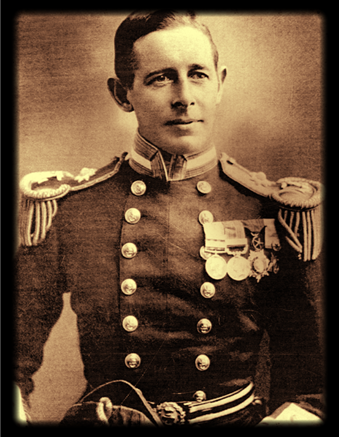