But who was Commandant Pieter Edward (Johannes) Raaff, CMG? Raaff was born in the Orange Free State in 1849, at a time when it was called Transoranje. In 1865, when he was only 16 he fought in the Boer dispute with Basutoland, and took part in the storming of Thabo Bosigo's mountain stronghold, in which he was badly wounded. He married Catherine, with whom he had five children. In 1878 he served with the Lydenburg Rifles, in Colonel Hugh Rowlands' column which set out to attack the stronghold of Chief Sekhukhune of the Pedi tribe. Upon Rowland’s request to assist with the British in the war against the Zulu nation, in 1879 Raaff began enlisting Hottentots and any European volunteers he could find in and around Kimberley, eventually leaving for Zululand at the head of this amorphous 138 body of men, dubbed by him the Transvaal Rangers. At the site of Raaff’s party, an officer of the Frontier Light Horse commented,

“A more forbidding lot of mixed Hottentots and the scum of the Diamond Fields was never collected together outside a prison wall”. Buller was happy to add the Rangers to his command." ​

The Transvaal Rangers went home and Raaff was appointed a Companion of the Order of St Michael and St George, which he proudly wears in the photo above (the award appeared in the London Gazette of 18 December 1879). In an official report to London in August that year, Lieutenant-Colonel Redvers Buller VC, referred to Raaff as,

“…a perfect type of a border soldier, brave, indefatigable, and deeply versed in African warfare. I have profited equally by his assistance and by his advice.”

This illustration from The Graphic, London, 10 March 1894, depicts members of the retreating Forbes Column butchering a horse for rations. The report states that 112 horses were killed, eaten, destroyed, or left on the road during the retreat.

Commandant Pieter Raaff is standing in the centre of this group of irregulars who volunteered to fight the Zulus in 1879 (Photo S. Bourquin)

A column of 200 drawn from the Salisbury and Victoria Columns, under the command of Major Patrick Forbes Forbes, left GuBulawayo on 8 November, meeting up with Gold-Adams and Raaff four days later on the Khami River. Ultimately, Raaff would command 20 volunteers from Tuli and 78 Bechuanaland Border Police as part of Forbes’s column that continued in pursuit of the retiring amaNdebele impis and their king. Although Forbes maintained that some of Wilson’s patrol had survived the battle across the flooding Shangani, he set off with the remains of his column on an arduous journey back to the relative safety of GuBulawayo.

Most accounts, including that by Fred Burnham, relate how a tireless Raaff kept the worn and starving men heading south. Fred Burnham in his first meeting with Raaff, found a man of handsome features with strong forceful eyes, who spoke with an English accent. He had a large bushy beard and curly red, shoulder-length hair, parted in the middle. Dogged by sporadic attacks from pursuing impis, Raaff forced the pace by day and night, the men surviving on horse meat and wild roots.

On arrival at Potchefstroom Raaff found that, without an armed support, it was impossible to arrest any of the perpetrators. The town would eventually come under siege attack from 4,000 Boers. At the end of hostilities, Raaff was himself arrested and locked in a room at General Cronje’s headquarters.

Regarded as a collaborator, Raaff was tried by a Boer military court, but Paul Kruger refused to endorse the death sentence imposed on Raaff, electing instead to keep him as a prisoner of war. Upon his release on 1 April, Raaff set up a butchery in Kroonstad in the Orange Free State Republic. He then took to prospecting for gold in the Transvaal before moving north into a new territory established by Cecil Rhodes and Doctor Jameson. Here he gained prominence as the Resident Magistrate at Fort Tuli. With the onset of the Matabele War in October 1893, and in a move that many considered to be a ploy to outflank Lobengula, Raaff was tasked to raise a column and march from Tuli towards Bulawayo, ostensibly to protect Bechuanaland from imminent amaNdebele invasion. Accompanied by a contingent of 220 men of the Bechuanaland Border Police under Colonel Hamilton Goold-Adams, resplendent in his Imperial uniform, Raaff set off with 235 volunteers. With the taking of Bulawayo, Jameson was anxious to apprehend Lobengula, who had fled his royal kraal, heading north along the Shangani River.

Commandant Raaff’s simple grave in the Bulawayo Cemetery, in the process of being cleaned up by Alan Bryant and his team (Photo Alan Bryant)

After the Zulu war Raaff was offered a governmental position in the West Indies, which he turned down, taking up employ instead with the British as a political officer, a position where he found himself caught in the middle of a growing confrontation between the Boers and his employers. He warned the British about a Boer attempt to rescue one of their number who was being held for trial in Middelburg. When the so-called First Boer War started, Raaff was in a difficult situation but continued to act as a go-between for negotiations at Potchefstroom.

As tensions rose, a Transvaler by the name of Bezuidenhout had refused to pay the British taxes, resulting in his wagon being seized by the court to recover the debt. On the day of the auction, however, fellow republicans prevented the sale from taking place, dragging the wagon away. When this intelligence reached Pretoria, Transvaal administrator Sir Owen Lanyon sent down a few companies of the 21st Regiment, under the command of Major Thornhill, to support the Landdrost in arresting the dissenters. Lanyon appointed Captain Raaff to act as special messenger to the Landdrost's Court at Potchefstroom, with authority to enrol special constables to assist him to carry out the arrests.

Raaff's Transvaal Rangers were at first ordered to Derby, close to the northern border of Natal, but when Rowlands' column was broken up the mounted troops were attached to Brevet Colonel Evelyn Wood's No.4 Column. The ill-conceived attack on Hlobane mountain in late March 1879 cost many lives, especially those of the irregular cavalry under Lieutenant-Colonel Redvers Buller's command. The Transvaal Rangers were in the group that came in from the east and scaled the heights in pouring rain. The attack looked, initially, like a success, but a Zulu impi of 23,000 approached and the retreat of Buller's men began. It turned into a disastrous rout down Devil's Pass and only the actions of a few brave men prevented a total massacre.

Buller singled out Pieter Raaff to praise him for his distinguished conduct. The battle that followed at Khambula was a victory for Wood's troops, Raaff again responsible both for giving early warning of the approach of the impi, and for leading a sortie against the right horn of the Zulu formation. Raaff was involved in the battle of Ulundi but it was the end of the war and the irregular units were disbanded.

On 20 December 1893, public opinion precipitated a Court of Inquiry into the circumstances behind the slaying by the amaNdebele of Major Allan Wilson and his 33 men, in a battle which became the legend of the Shangani Patrol. Scout Fred Burnham and Captain Pieter Raaff were convinced that there were no survivors of Wilson’s patrol, the stranded men cornered by thousands of Lobengula’s warriors on the banks of a river in full flood. In the fifteen days that Major Patrick Forbes and his dispirited column took to return to Bulawayo, they were repeatedly attacked, losing almost all their horses in the journey. A young trooper wrote in his diary,

“No news from Wilson’s party – Forbes in disgrace – Raaff practically running the show.”

In an account by Arthur Nangle of F Troop of the Bechuanaland Police, appearing in The Graphic, London, on Saturday 10 March 1894, he wrote,

“Commandant Raaf (sic) C.M.G., died at Bulawayo on December 25th, 1893. He was with us during the expedition in search of Lo Bengula and subsequent retreat. His services were, indeed, valuable, for during that retreat he never appeared to obtain and rest, and his advice and great experience in African warfare, no doubt, was what brought us safely through a very trying time. He never showed sign of breaking down until we reached the relief party, and then his strength failed, and he was compelled to place himself in the doctor’s hands”.

As the unshaven, worn and haggard men, most in rags and with boots in tatters, neared Inyati, they were met by a relief column. Raaff was welcomed and treated as a hero, Forbes completely ignored by Cecil Rhodes. Accounts vary as to the exact date of Raaff’s death, from 25 to 27 December 1893, but it was one evening that the ailing Raaff collapsed with a sharp pain in his abdomen. Jameson diagnosed inflammation of the bowels, but Raaff did not make it through the night. Part-time soldier, butcher, pioneer, bushman, magistrate and exceptional leader. Historian and published author Peter Baxter describes Raaff in his article on the Shangani Patrol as,

“…doubtless the single most competent commander present in Bulawayo”. 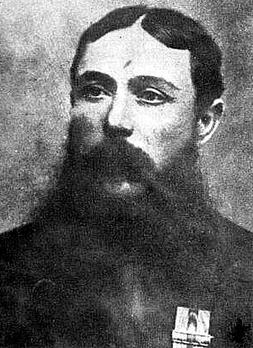 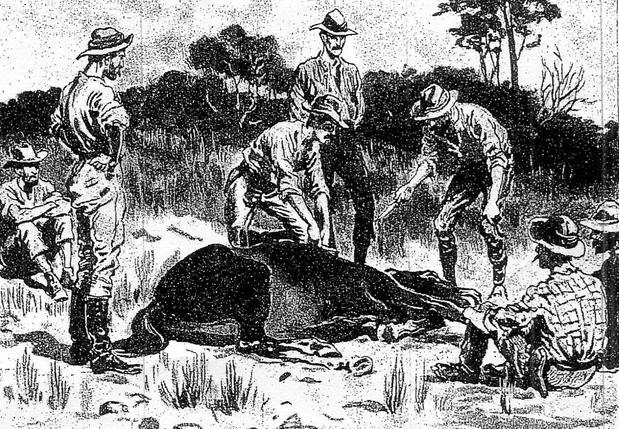 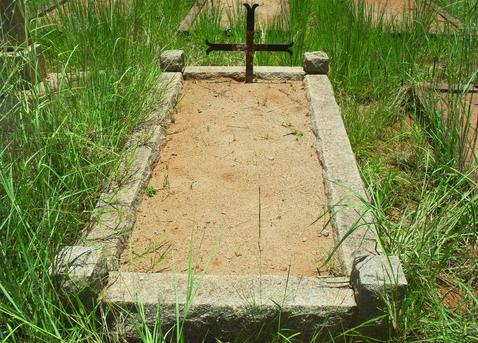