This incident has particular meaning for me, as I had visited this post on numerous occasions when I was stationed at Ft Harrison on the Angwa River, south of Kanyemba. On most visits, I stayed with the BSAP, where I was afforded a very warm welcome, with many a pleasant evening spent in the "Stick it Inn" pub. With time I got to know Bruce Matthews and his team very well, and had the privilege of meeting the gentle giant, Mike Sullivan. I was devastated when I heard the news.

On 17 September 1976, two police launches from the post at Kanyemba, Sipolilo, while on patrol on the Zambezi River, came under heavy rocket and small-arms fire from Zambia. The second launch was hit, killing Detective Patrol Officer (DPO) Mike Sullivan. Patrol Officer Rob Campbell sustained a serious head wound, and National Service Patrol Officer (NSPO) Simon Bunt was shot twice in the right leg. Despite his wounds, NSPO Bunt managed to regain control of the stricken launch and ground it on the Rhodesian bank. This however now provided the assailants from across the river with a static target as they concentrated fire onto the boat.

Section Officer (SO) Bruce Matthews, Member-in-Charge at Kanyemba, beached the other launch some distance away from the disabled one and, together with PO Duncan Paul, NSPO Edge and FR Walter Bredenkamp, immediately set about rescuing their fellow officers. SO Matthews carried out one casevac to camp, leaving the two crew members to guard the other wounded man and DPO Sullivan’s body. He returned under cover of darkness, fully aware of the high risk involved, with volunteers NSPO Purditt and Field Reservist Thornton to perform the second casevac and to uplift the remaining men.

The Police Decoration for Gallantry, obverse left and reverse right

For their conduct above the call of duty that day, the Police Decoration for Gallantry, the BSAP equivalent of the Bronze Cross of Rhodesia, was awarded to,

The Commissioner’s Silver Baton for Bravery

For his brave actions despite his wounds, the Commissioner’s Silver Baton for Bravery was awarded to,

The Commissioner’s Bronze Baton for Bravery

For displaying qualities of determination, courage and devotion to duty of a high degree, the Commissioner’s Bronze Baton for Bravery was awarded to, 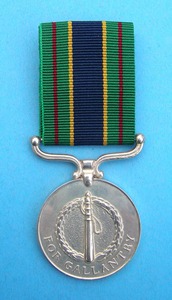 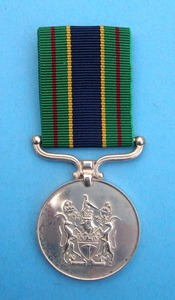