Mention of this Derbyshire market town’s name invariably conjures up an image of an iconic landmark: the crooked church steeple. It does, however, also speak of a military heritage built up over a millennium.

The word Chester itself is derived from the ancient Roman fort or ‘castrum’: military garrisons that peppered the English countryside during the occupation.

In 1266, at the Battle of Chesterfield, Royal forces quashed a rebellion by local barons. Come the English Civil War 400 years later, anti-Royalist sentiment was still strong. Chesterfield deployed militia, together with a ‘company of foot’ from Derby, to defend the town from the King’s forces.

In the 19th Century, the British Empire, a sprawling global property, demanded defending from armed threat. The Derbyshire and Nottinghamshire regiments of foot, later to be amalgamated as the Sherwood Foresters, attracted volunteers from the Borough of Chesterfield. Egypt and South Africa became household names, and with the outbreak of the Great War, hundreds answered Kitchener’s call. The Western Front claimed the lives of many of the town’s sons, their names commemorated in churches and on memorials throughout the town and satellite villages.​

WWII saw Chesterfield’s citizens enlisting with battalions of the Sherwood Foresters, serving in theatres such as the Western Desert, Italy, France and South East Asia.  So also came tales of acts of courage and bravery: in WWI, Fred Greaves, awarded one of the regiment’s first VCs; in WWII, Arthur Norman Crookes, the unique recipient of three DFCs and the American DFC. There were others. 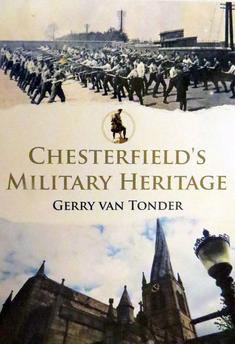