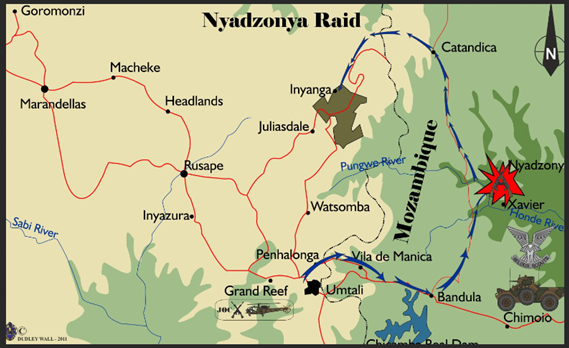 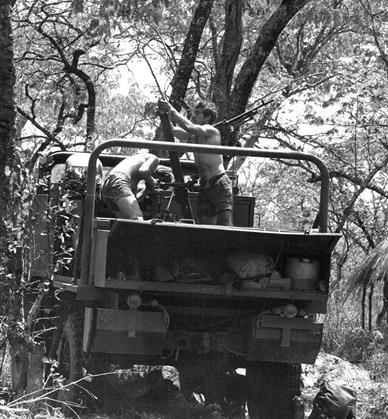 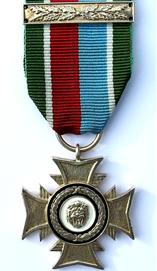 At just after midnight on the morning of Monday 09 August 1976, a column of ten Unimogs, four Ferret scout cars, and 84 officers and men of the Selous Scouts, under the command of Capt. Rob Warraker, crossed the border into Mozambique just north of Umtali. Their destination would be the large, recently discovered ZANLA logistics camp on the Nyadzonya River, a tributary of the Pungwe.

Intelligence gleaned from a captured terrorist had led Special Branch to believe that there was a large ZANLA base somewhere on the Pungwe River. However, it was only a chance sighting by a RhAF Canberra, flown by Wing Commander Randy Durandt, that confirmed the existence of a base housing up to 1 000 ZANLA cadres. Urgent preparation for Operation Eland got underway as the Selous Scouts Commanding Officer, Lt Col. Ron Reid-Daly, was cautiously given the go ahead by General Peter Walls, a decision supported by the latest estimate of 5 000 housed in the camp.

Flying column route in and out of Mozambique

The progress of the column was uneventful, as it passed through a slumbering Vila de Manica at 0200 hours. Telephone lines were cut to prevent any possible news of their presence reaching the main provincial Frelimo garrison at Chimoio. The Rhodesian vehicles moved north on the tar road to Catandica, and then, heading east on a dirt track that would take them to the Nyadzonya camp, they left part of the column at an ambush site to protect their exit route.

Once past the entrance boom to the camp, the Unimog carrying the 81mm mortar team was dropped off to cover an escape route towards the Nyadzonya River. The remaining column was not prepared for the sight of several thousand ZANLA cadres milling about on the parade ground! The vehicles spread out in a line, and a Portuguese-speaking sergeant addressed the rabble, on the pretense that they were Frelimo and have come with the news that Zimababwe had been liberated. However, the unruly and undisciplined mob failed to respond to the efforts by their leaders to restore some sense of order, and swept, screaming and shouting, towards the wide-eyed Scouts. Capt. Warraker, fearing that they would be swamped, immediately gave the command to fire. In a few minutes it was all over, and the troops conducted pre-arranged sweeps through the camp, accounting for any survivors and setting fire to thatched buildings and shelters found in the camp. Many insurgents also drowned trying to swim across the Nyadzonya River.

Their immediate mission complete, Capt. Warraker set off for the high-level bridge spanning the Pungwe, with the objective of blowing up the bridge before heading further north towards Catandica and then back onto Rhodesian soil somewhere north of Inyanga. Figures of the final death toll varied, with a final toll recorded by ZANLA of 639 shot and drowned. Rhodesian estimates were closer to 800.

For his bravery and leadership on this operation, 780749 Captain Robert Sidney Stanley Warraker was awarded the Silver Cross of Rhodesia. His citation states that he displayed leadership of a high order. He personally led an attack on the road-block protecting the Pungwe Bridge, and then proceeded to lay explosive charges whilst under fire from the enemy.

Capt. Warraker was killed in action 29 days after receiving this award, when the Canberra in which he was flying was shot down over Mozambique. He was 32 years old.

The raid on this ZANLA base only forty kilometres north-east of Umtali would have major political repercussions for Rhodesia. South African Premier John Vorster, believing his regional policy of détente with the Front Line States to be under threat from the actions of his neighbour to the north, immediately terminated Operation Polo and withdrew remaining South African helicopter pilots, mechanics and liaison officers.