​On Thursday 7 August 2014, I had the honour and privilege of delivering this book to Buckingham Palace, a gift from us to Her Majesty, Queen Elizabeth II. At the time Her Majesty was at Balmoral Castle in Scotland on her traditional summer break, but Chief Clerk Christopher Sandamas informed me that the book would be despatched to Balmoral Castle that very day. A few days later I received a letter of thanks from Her Majesty. This was truly a landmark event in the history of the country that was Rhodesia.  My son Andries accompanied me to London, taking photos outside the Palace. The rest of the photos are mine.

As the 19th century and Queen Victoria’s long reign drew to a close, volunteer squadrons of the Rhodesia regiment, recruited by Colonel Baden-Powell, were positioned along the border with Bechuanaland, to defend Rhodesia against Boer aggression.

In 1914 Rhodesians again rallied to the Crown with the formation of two battalions of the Rhodesia Regiment to counter the German presence in South West and East Africa. Shortly after, many volunteered to join the Allied forces on the Western Front.

During the Second World War the indomitable combat prowess and leadership talents of Rhodesia Regiment volunteers were strongly evident in many theatres, including North Africa, Somaliland, the Middle East, Italy, the Adriatic, Western Europe and South East Asia.

In 1947 the Crown bestowed the ultimate accolade, with the title ‘Royal’ prefixed to the regiment. Through the 1950s and ’60s, the experiences of Rhodesians in successive areas of conflict—Malaya, Suez, Aden and Nyasaland—significantly enhanced aspects of Rhodesia’s territorial army, particularly with regard to counter-insurgency warfare. Conscription ensured combat-readiness for the growing number of battalions and independent companies established throughout the country, providing a solid basis for the regiment to play a vital role in countering the ZANLA/ZIPRA guerrilla insurgencies of the 1960s and ’70s.

Coordinated by Hugh Bomford, this definitive history has, over a period of seven years, been compiled by a core group of dedicated people, with over 400 other contributors. Thousands of photographs and illustrations complement the in-depth text, with several appendices covering rolls of honour, honours and awards, leadership rolls, intake records, and uniforms and embellishments.
​ 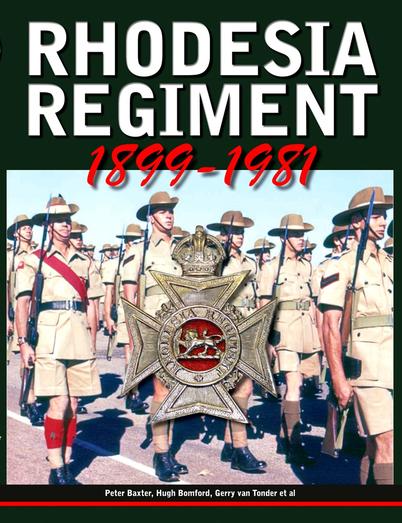