Born in Ireland in November 1875, Brady began his military career shortly after leaving Dublin University when, with the outbreak of the South African War in 1899, he enlisted with the 45th “Irish Hunt” Company, 13th Battalion, The Imperial Yeomanry.

Arriving in South Africa in 1900, he was subsequently commissioned in the Commander-in-Chief’s Bodyguard and Kitchener’s Fighting Scouts. After the war, Brady decided to remain in South Africa to pursue his chosen profession in education, serving as Headmaster of Grey College in Bloemfontein, before becoming a schools inspector. In 1909, he took up the post of Senior Inspector of Schools in Southern Rhodesia, from where he joined the hundreds of Rhodesian volunteers heading for Britain to enlist at the start of World War I in 1914.

Commissioned on the Special List as a Lieutenant, he had the distinction of being the first commander of the Rhodesian Platoon of the KRRC, thus starting the long association of Southern Rhodesia with this famous British Regiment. After a period as a Company Commander with the 2nd Battalion KRRC, Brady was appointed as a General Staff Officer with the 4th Corps and then Brigade Major to the 148th Irish Brigade, before returning to regimental duty in 1917, becoming Second-in-Command of the 2nd Battalion KRRC. Brady commanded the 4th Battalion in the last four months of the war, then serving with the Army of Occupation on the Rhine, where he also commanded a battalion.

Wounded twice, Brady was appointed a companion of the Distinguished Service Order, the Croix de Guerre, and Mentioned in Despatches four times.

Returning to Southern Rhodesia in 1920, he continued to serve both with the Reserve of Officers of the Regular Army, and as the District Commander of the Southern Rhodesia Territorial Force. Upon his retirement in 1937, Brady was promoted to Colonel. He then entered into politics, successfully taking the Bulawayo North seat.

With the outbreak of World War II, Brady again put on his uniform, this time as Military Observer and Liaison Officer for Southern Rhodesia to the Middle East Campaign. However, ill-health forced him to return home, his service being recognised in June 1943 by the award of the OBE. 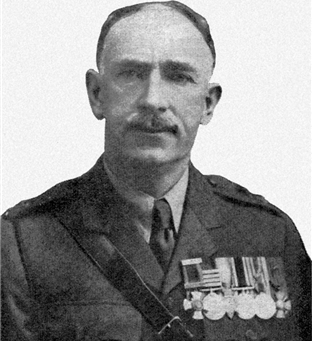